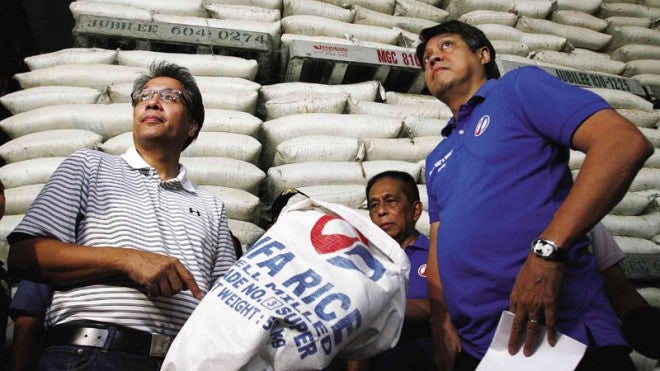 MANILA, Philippines–Amid the spike in prices of basic commodities, expect more raids on warehouses as the government cracks down on traders who hoard National Food Authority (NFA) rice, mix it with other varieties or pass it off as commercial rice.

The first wave of raids came Sunday with the seizure of more than 170,000 sacks of rice from warehouses in Metro Manila and other parts of Luzon suspected of illegally hoarding NFA rice.

The Criminal Investigation and Detection Group (CIDG) of the Philippine National Police, and the NFA conducted simultaneous raids on 12 warehouses Sunday morning on orders from Interior Secretary Mar Roxas.

The raids will be expanded to warehouses in the Visayas and Mindanao, said Kiko Pangilinan, presidential adviser on food security and agricultural modernization, who, along with Roxas, led the inspection of two warehouses in Muntinlupa City on Sunday.

On Thursday, the NFA and the CIDG raided a warehouse in Marilao town, Bulacan province, where they found about 1,200 sacks of NFA rice being repacked as commercial rice for resale at higher prices.

The average retail price of well-milled rice rose to P42.19 per kilogram in early June, an increase of 19 percent from prices a year ago. The price of imported garlic shot up to P300 per kg from just P17.

Undeterred by the P2-million penalty for price manipulation, traders were earning P26 billion in profits a year as a result of the spike in garlic prices, Sen. Cynthia Villar, chair of the Senate committee on agriculture, said on Thursday.

CIDG and NFA officials discovered about 15,000 sacks of mixed NFA and commercial rice in two warehouses at Kilometer 23 on West Service Road in Barangay (village) Cupang in Muntinlupa. The warehouses were run by Jubilee Multitech Inc., owned by a certain Jimmy Go.

The rice depot was repacking NFA rice mixed with commercial rice and selling it at P40 per kg.

Roxas said he ordered the CIDG to conduct operations in the area based on text reports about the illegal repacking of NFA rice.

Pangilinan noted that his men confirmed on Saturday that there were indeed various violations committed by the warehouses since these were not licensed to sell NFA rice.

The warehouses yielded 14,996 bags of NFA rice and 4,580 bags of commercial rice. Some NFA sacks were turned inside out to hide the NFA markings on the bags.

A large number of empty NFA and commercial rice sacks were piled in the two warehouses. A milling machine, believed to be used for polishing inferior quality and old stocks, was also discovered.

Authorities found the old rice stocks mixed with rodent droppings and cockroach eggs at a part of a warehouse where the supposed mixing of rice was being done.

“With these practices, there was a clear intent to deceive the buying public,” Pangilinan said.

The illegal repacking and hoarding of NFA rice, according to Pangilinan, is a clear violation of Republic Act No. 7581, or the Price Act Law, which is punishable by five to 15 years’ imprisonment and can cost a business its accreditation and lead to its blacklisting.

The owner of the warehouses was not present during the inspection, though security guards of the establishment made sure that the gates of the depot were locked before the lawmen arrived.

The CIDG head, Chief Supt. Benjamin Magalong, said he asked for the keys to the warehouses but the guards refused, saying the owner had asked that the inspection be done the next day. A bolt cutter was used to allow CIDG officers to enter the warehouses.

Despite the absence of a search warrant, the NFA has visitorial powers under Presidential Decree No. 4 to search and inspect warehouses believed to be illegally selling or repacking NFA rice, according to Roxas.

Officials of Cupang and Muntinlupa Mayor Jaime Fresnedi were present as witnesses in the opening and search of the warehouses.

Roxas said the inspection was part of Aquino’s program to ensure that Filipinos have enough food to eat. “We want to stop those individuals who manipulate prices in the market, which results in inflation and make thousands of Filipinos hungry.”

NFA Administrator Arthur Juan said the NFA rice was sold for P27 to P32 per kg but noted that because of its quality, some rice traders were passing it off as a commercial variety and were selling it for at least P40 per kg.

Juan said he was encouraging the public to report illegal rice-trading practices by texting the NFA hot line 0906-4363133.

Pangilinan said the PNP and the NFA would conduct an inventory of the rice found at the warehouses. “While there are ongoing investigations, these warehouses will be ordered to stop their operations first.”

In a statement, Roxas said 170,263 sacks of rice were seized from the 12 warehouses.

“Among the 12 warehouses, five were found to have violated several laws, including Republic Act No. 7581, or the Price Act [Law],” Magalong said.

A warehouse in Barangay Tikay in Malolos City, Bulacan, which is owned by Purefeeds Corp. FBIC, was found to have 32,500 bags of imported commercial rice.

“It was disclosed that the company was authorized to engage only in the business of commercial animal feeds,” Magalong said in a statement.

But the representative of the establishment failed to show pertinent documents for the importation of commercial rice.

Three other warehouses had no NFA licenses and sign boards, while another was suspected of illegal possession of imported rice.

Magalong identified the warehouses as:

The warehouses are now secured by NFA enforcement personnel and CIDG operatives.

After the inspections, Roxas directed the PNP to investigate if there was indeed a cartel responsible for the rising prices of basic commodities.

“We must give importance to this campaign because millions of Filipinos are suffering from the rising prices of basic goods. It is not acceptable that so many are starving because a few are taking advantage of the situation,” he said.