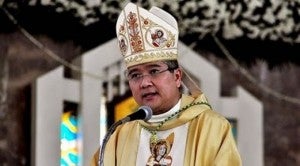 MANILA, Philippines—Catholic bishops challenged the Aquino administration on Friday to “let go” of corrupt officials in its ranks.

Archbishop Socrates Villegas, president of the Catholic Bishops’ Conference of the Philippines (CBCP), said the investigation into the misuse of state funds should not be selective and should not spare administration allies.

“A government that professes to tread the straight path must remain true to that profession and must be willing to let go of the corrupt in its own ranks,” the Lingayen Dagupan archbishop said in a statement.

Villegas made the call after the Supreme Court on Tuesday declared unconstitutional the Disbursement Acceleration Program (DAP), striking down the presidential budgetary prerogative.

The CBCP head also called on the Commission on Audit (COA) and the Office of the Ombudsman to tell the nation where the DAP funds went.

“While, indeed, in many cases, it would be impractical, unhelpful even, to undo every project funded by what the high court has ruled to be unconstitutional means, we must nevertheless know how these monies were used, for where there was an illegal and immoral application of funds, there must be restitution,” Villegas declared.

According to him, “there is no reason to direct our ire only at the three senators, or at those presently accused.”

Critics have slammed the administration for treating Mr. Aquino’s allies implicated in the PDAF and DAP scandals differently from those linked with the opposition.

Filipinos “must humbly recognize that the propensity to make use of what is not ours to better the lives of our families or to gain access to luxuries that would otherwise be beyond us will be found in all of us,” Villegas said.

“We are all guilty by attitude and by our disposition,” he added as he renewed calls for national conversion not only of individuals but of institutions as well.

“We must pray together for the grace of conversion, because the prosecution and punishment of a few will not rid the nation of the propensity to corruption that is found in us all,” Villegas said.