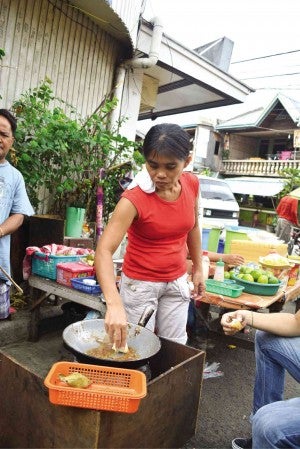 A CUSTOMER dips her “puso” into the cauldron containing the simmering concoction of smashed pork brains and soy sauce at the stall owned by Guada Dacua in Barangay Pasil, Cebu City. ZACK VILLEGAS/CONTRIBUTOR

CEBU CITY—This exotic food is considered the poor man’s meal in Cebu City.  But “tuslob buwa” is so popular it has become a steady source of income for one family for three generations in Pasil, a poor village in the city.

Guada Dacua, 24, says her family has been cooking tuslob buwa for more than 32 years. It was started by her grandmother, Marina Colarte, in 1982 and was passed on to her mother, Emma, and then to her.

Tuslob buwa used to be found only in Pasil. But like any successful business, several eateries in Cebu and Mandaue cities have began offering their own version of it.

The food is not for the faint of heart, however. It is made of mashed pig’s brain sautéd in garlic and onions and seasoned with salt and soy sauce.

It is called tuslob buwa because it describes in Cebuano how it should be eaten: “Puso (rice wrapped in palm fronds)” is dipped (“tuslob”) into the bubbling stew (“buwa”) while it is still in the wok.

Customers milling around the wok while eating is a common sight. They don’t pay for the stew but are instead charged for the number of puso they consume. Each puso usually costs P3.

For P15, one can already have a filling meal.

According to Guada, her grandmother decided to put up a stall in Pasil and sell tuslob buwa in 1982 to help provide for their five children.

At that time, Marina’s husband was working as a porter at the fish market in Pasil and his income was not enough to provide for their two daughters and three sons.

Marina decided to use the recipe she learned from her mother while growing up in Sibonga town in southern Cebu because it didn’t require a lot of capital. She put up a stall on a vacant lot near her house in Pasil and started selling tuslob buwa.

With a catchy name and a cheap price, people started flocking  to her stall for a chance to try the new street food. At that time, the puso was sold at only P1 apiece.

It didn’t take long for Marina’s neighbors to take out their woks and sell their own versions of the food.

“A lot of our neighbors followed after my grandmother that there were little stalls for tuslob buwa in every corner of the street,” Guada said.

Marina eventually passed the family business to her daughter Emma to help her, especially because she had nine children to raise.

At that time, Emma decided to expand the small stall by putting up a tarpaulin tent and placing three long tables and chairs to accommodate more customers.

Business was good then.

Guada recalls that  her mother has sold more than 600 pieces of puso a day at P3 each.

“Before, people would arrive in dozens from different towns just to taste our tuslob buwa.  Other customers had to stand in line before they could eat,” she says.

But in 2012, Guada says that  barangay officials removed the tent, tables and chairs after she could not produce a business permit or a title of the lot  she occupied.

“We tried pleading to the barangay,” Guada recalls. “But we were told they couldn’t do anything about it because we were settling illegally.”

Guada has reopened the family business on the sidewalk of

L. Flores Street, still in Pasil, but she has kept their operation small.

Instead of long tables, Guada placed a small one for her portable stove. “We don’t plan to expand anymore,” she says. “The barangay might just demolish it anyway.”

Before, their business was not disrupted by rain or by the intense glare of the sun because the tent protected their customers.

“Now when it’s too hot or when it’s raining, we have to close up shop early,” Guada says.

Their profit was cut by half because they could  sell only

Still, Guada says she remains hopeful that business would pick up.

She gets orders for precooked tuslob buwa, which she sells at P500 per pot. She also sells “bola-bola (fried meat balls),” “lumpiang shanghai (spring rolls)” and “lumpiang taugi (a variation of spring rolls with   mung bean sprouts).”

Guada says selling tuslob buwa has helped her get by as a single mother to 3-year-old Althea Nicole.

“The P900 I earn every day may be small,” she says. “But when I’ve paid off the bills and my loan, I want to send my daughter to a private school.”