Export of PH copra grinds to a halt | Inquirer News

Export of PH copra grinds to a halt 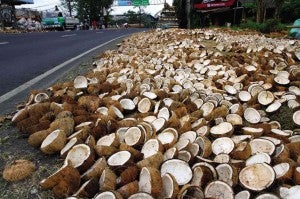 LUCENA CITY, Philippines—The extent of the devastation wreaked on the country’s coconut industry by Super Typhoon “Yolanda” and aggravated by a delayed government response to coconut scale infestation (CSI) is slowly unraveling with a group of coconut producers saying there was zero export of copra for at least four months this year.

United Coconut Associations of the Philippines (Ucap), in a report, also cited numbers that should alarm businesses and individuals involved in the coconut industry.

In April alone, Ucap said, the monthly volume of exports of coconut-based products fell by 25 percent, the seventh month in a row.

While the country exported 70 tons of copra in 2013, the exportation ground to a halt for four months this year.

The volume of desiccated coconut exports also dropped by  25 percent to 9,339 tons.

Still on its knees as a result of Yolanda, the coconut industry took another blow from CSI, or cocolisap, which is threatening to kill millions of coconut trees nationwide.

The scientists’ group Advocates of Science and Technology for the People (Agham) said the government response to CSI was five years late and “palliative.”

Finesa Cosico, Agham secretary general, said the government response to the CSI infestation was “band-aid measures in the absence of a genuine program for coconut farmers with clearly defined, sustainable and long-term actions.”

Cosico, in a statement, said the heart of the problem was the grinding poverty that had enslaved coconut farmers for decades.

She urged President Aquino and de facto Agriculture Secretary Francis Pangilinan to address this, since giving farmers the capacity to withstand pests, calamities and other threats to the coconut industry was better than offering “myopic or technical solutions.”

Cosico, an agriculturist and entomologist, said helping coconut farmers become more productive would not only help farmers cope with CSI, but also cushion the impact of CSI on the coconut industry.

What the government has been doing against CSI, like pruning leaves or spraying pesticides, is applicable only in the early stages of infestation, Cosico said.

Environment group Greenpeace and coconut farmer groups have criticized the government’s use of the toxic pesticide neonicotinoids to combat CSI.

“Application of synthetic pesticides must be made as a last resort and must be done as a strict regulation to prevent environmental contamination and pesticide resistance,” Cosico said.

She said biological control, or the introduction of natural predators of CSI, should also be promoted to regulate pest population.

She said coconut farmers should be given their own land as part of a genuine agrarian program.