I see a Marcos running for the presidency—Imelda 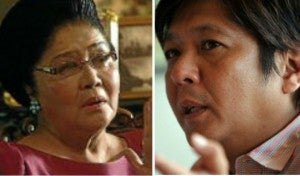 MANILA, Philippines—Celebrating her 85th birthday in Laoag City on Wednesday, Ilocos Norte 2nd District Representative Imelda Marcos made a prediction for the 2016 elections.

“I see a Marcos running for the presidency. I see a Marcos as President. That is destiny,” she told the media in a television interview.

She mentioned the name of her only son, Senator Ferdinand “Bongbong” Marcos Jr.

Asked by the media if the Senator’s alleged involvement in the pork barrel scam could be a deterrent, Imelda brushed it away, saying it’s all politics.

Imelda is the wife of the late dictator Ferdinand Marcos, who was ousted in a popular uprising in 1986 called Edsa Revolution.

Split between LP and NP seen before 2016