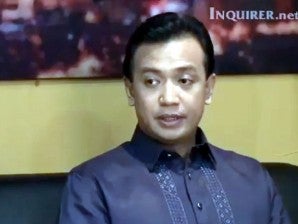 MANILA, Philippines—The coalition of the Liberal Party and the Nacionalista Party is bound to break up when the time comes to choose each group’s standard bearer in the presidential election in 2016, an NP senator told the Philippine Daily Inquirer Saturday.

Senator Antonio Trillanes IV, one of three NP senators that ran and won under the LP-led Team P-Noy coalition in the May 2013 elections,  said he expects both parties to have different presidential candidates in 2016 regardless of whom President Benigno Aquino will endorse by then.

“The way I understand it, the coalition will be binding up to the end of P-Noy’s (President Aquino’s) term as far as legislation is concerned.  But as regards the presidential elections in 2016, parting ways is inevitable,” Trillanes said. “I believe both parties will field their respective candidates from their own ranks.”

Trillanes made the comment after Iloilo Representative Jerry Treñas, an LP stalwart, said President Aquino’s choice of presidential candidate will be key to keeping the coalition intact for 2016.

Asked if he thought the two dominant parties will go separate ways regardless of Mr. Aquino’s choice, Trillanes said, “Yes, the NP has its vision and plan for our country, which should be the primary basis for any presidential run of all the other parties.”

While Aquino and the LP led the administration coalition in the 2013 elections, it was the NP that ended up with the most seats in the 24-member Senate with five.

These include re-electionists Trillanes and Alan Peter Cayetano and first-time senatorial bet Cynthia Villar.  They joined NP Senators Pia Cayetano and Ferdinand Marcos, Jr., who were elected in 2010.

Despite having the most senators,  the NP continued to support the LP-led coalition as its members supported Drilon’s bid for the Senate presidency.
Drilon was the Team P-Noy coalition’s campaign manager.