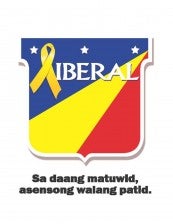 The LP: Stepping up

MANILA, Philippines—President Benigno Aquino’s Liberal Party has sealed a “partnership” with both the Nationalist People’s Coalition and the Nacionalista Party, the political party of his bitter rival during the 2010 elections.

Representative Rex Gatchalian, NPC spokesperson, on Tuesday said his party opted for a partnership–not a coalition as earlier announced–because the deadline for the registration of official coalitions with the Commission on Elections had long expired.

“Instead of a coalition agreement, we’re signing a partnership agreement, which states our desire to continue our support in the reform agenda of the President,” Gatchalian said in a joint press conference with Gonzales.

But while the NP has been clear on who it would include in the unified slate, the NPC was still unsure as of Tuesday whether Senator Loren Legarda and Representative Juan Ponce “Jack” Enrile Jr., son of the Senate President, would officially run under the administration ticket.

“We’re just waiting to know who among the NPC (candidates) would be with us. In the case of NP, it’s already clear,” said House Majority Leader Neptali Gonzales II, a senior LP member, referring to Senators Alan Peter Cayetano and Antonio Trillanes IV, and Representative Cynthia Villar.

Trillanes would be included in the administration ticket despite concerns over his attacks on Foreign Secretary Albert Del Rosario over his back-channel efforts on the territorial dispute with China.

Some LP members earlier disapproved of Trillanes’ criticism of Del Rosario, who is considered an alter ego of the President on foreign affairs.

Gatchalian could not say exactly what was keeping Legarda and Enrile from finally deciding whether to run with the administration or the United Nationalist Alliance. What was certain was that both of them took their certificates of nomination and acceptance (CONA) as NPC candidates.

“We submitted our list of potential senatorial candidates. If the LP desires to also pick them up as guest candidates, then that is purely their decision, but on our side…Senator Legarda and Congressman Jack Enrile already took their CONA as senators of the NPC,” Gatchalian said.

Gonzales said the LP would await and respect the final decision of Legarda and Enrile.

“But at the end of the day, it has to be clear where they would align themselves,” he said in Filipino.

Former President Joseph Estrada, one of the three senior UNA leaders, earlier said that Legarda had “committed” to run under the coalition. He said he had been told that should the administration likewise draft Legarda, “she would not climb its campaign stage.”

Enrile could be seen as a logical choice in the UNA senatorial lineup because his father, Senate President Juan Ponce Enrile, is a senior official of the coalition.

In a previous interview, Gonzales said the President was leaving the decision to the two Enriles. “President Aquino doesn’t want to influence, in one way or another, the decision of Jack,” he had said.

Gatchalian said the NPC was still in talks with the LP to determine under which banner Legarda and Enrile would end up running. “We continue to talk and we continue to consult our two candidates,” he said.

Part of the ongoing discussions includes local positions that might be contested by LP and NPC candidates, he said.