PH economy losing $3.27B in human productivity due to traffic mess 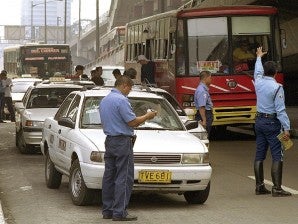 MANILA, Philippines — The notorious traffic on Metro Manila’s roads is not just a daily annoyance that millions of Filipinos have to live by.  The country loses billions of dollars worth of human productivity, according to a transportation official.

A recent study showed that Metro Manila traffic could cost the Philippine economy $3.27 billion a year in productivity due to wasted man hours and higher freight costs, among other problems, the Department of Transportation and Communications (DOTC) said.

Citing the study’s findings, DOTC Undersecretary Rene Limcaoco said this highlighted the need for the government to accelerate the rollout of transportation-related projects to catch up with the country’s ever-expanding needs

“The obvious thing the Philippines needs is to expand its infrastructure to meet the country’s economic goals,” Limcaoco said, speaking at the 2012 Philippine Energy and Infrastructure Forum on Tuesday.

“Our infrastructure stock is clearly insufficient,” he said. “It drives a certain point home for us in government,” Limcaoco added.

The study covered the year 2011, and was conducted by the DOTC together with the University of the Philippines National Center for Transportation Studies.

Limcaoco said traffic does not only lead to thousands, if not millions, of wasted man-hours on a daily basis, it also adds “friction” to trade by making the movement of goods from one point of the country to another more difficult.

Bulk of the country’s imports and exports still pass through the international cargo terminals in Manila port district in Tondo.

Fortunately, the Aquino administration has taken the appropriate steps to remedy the country’s situation by allocating more than two-thirds of the government’s infrastructure budget for transportation-related projects under the DOTC, according to Limcaoco.

“Properly implemented infrastructure raises overall productivity reduces the cost of production, and most important for us, greatly enhances opportunities for the poor,” Limcaoco said.

The best way to solve Metro Manila’s traffic situation was the development of the country’s train lines, which has become the DOTC’s number one priority, Limcaoco said.

He said the DOTC would start accepting bids for the P30-billion civil works component of the Light Rail Transit (LRT) line 1 Cavite Extension project by next month. The prequalification stage to screen interested bidders ends this week.

The other half of the LRT 1 project, which will cost another P30 billion, will involve the purchase of 156 new train coaches that will be funded through an overseas development assistance (ODA) loan.

Another priority project that recently secured approval from the National Economic and Development Authority (NEDA) was the LRT line 2 East Extension to Antipolo.

Both projects are expected to benefit the dense populations in the areas they serve, which are on the outskirts of Metro Manila.

“Mass transportation is an effective equalizer. It creates new living spaces. With reliable rail systems, additional residential areas are made liveable,” Limcaoco said. “Now, a less affluent person can live farther away and have cheaper home expenses, but still be able to work in the city same as someone more affluent who might live closer,” he said. “This equalizes the playing field between rich and poor,” he said.