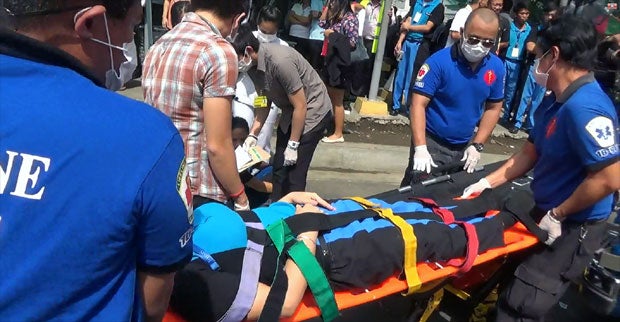 Rescuers carry an injured woman during an earthquake drill along Roxas Boulevard in Manila on Wednesday morning. NESTOR CORRALES/INQUIRER.net

MANILA, Philippines—In anticipation of a major earthquake in the metropolis, the National Disaster Risk Reduction and Management Council and the City of Manila conducted a city-wide earthquake drill Wednesday to prepare Manilenyos in the event such a catastrophe strikes.

During the drill, rescue squads simulated the actions that should be undertaken when the movement of the valley fault system causes a magnitude 7.2 earthquake.

Director Renato Solidum of the Philippine Volcanology and Seismology Institute said that Manilenyos are “aware” of the situation, but the readiness still needs some work.

“They are aware, they have awareness, if the disaster strikes,” Solidum said. “But the readiness still needs to improve, especially the [stability of] buildings.”

During the drill, different scenarios were simulated like car collisions and the ensuing fires with the Philippine Amusement and Gaming Corporation building and the Emerald Garden restaurant used in the simulation.

Employees inside the Pagcor building were ordered to evacuate the premises before doing the simulation.

Solidum added that Filipinos should have a “disaster imagination” wherein they should anticipate how a disaster strikes and the aftermath of such.

“We should have a disaster imagination, we are preparing years before it strikes,” Solidum said.

Undersecretary Alexander Pama of the NDRRMC said that reaction during times of disasters is a priority.

“In this kind of situation, reaction time is very important,” Pama said. “We don’t want this to happen but in the case that it happens we are ready.”

He may be satisfied with the drill but Pama said that it’s premature to declare if Manila is ready for the Big One.

“Based on the scenario, they are prepared but it’s still premature to say for the Big One,” Pama said.