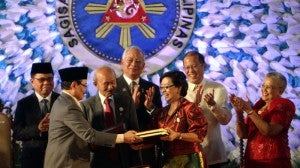 DAVAO CITY, Philippines — The Mindanao Peoples’ Caucus called on President Benigno Aquino to make public the Bangsamoro Transition Commission’ version of the Bangsamoro Basic Law to maintain the people’s trust and confidence in the peace process.

Mary Ann Arnado, MPC spokesperson, said speculation about the peace roadmap, as agreed upon by the government the Moro Islamic Liberation Front, was rife because the document that was envisioned to bring lasting peace in Mindanao has not been opened to the public.

“We feel that enough time has passed for a thorough review of the BTC draft; it is also about time to give the public, especially the Bangsamoro constituency, the opportunity to examine the document,” Arnado said in a media statement on Tuesday.

She said making public the document would manifest “the spirit of transparency, the avowed policy of the administration of President Aquino.”

At same time, Arnado said they were urging BTC to do the same.

“We also urge the Office of the President to immediately release its comments to the BTC’s draft Basic Law even before a ‘revised’ draft is submitted to Congress by July 28,” she said.

Arnado said the MPC believed the people of Mindanao should be given the chance to know what the document really contains because in the process of writing the Basic Law, the BTC asked the grassroots communities and various sectors to provide inputs and share their thoughts and sentiments.

“With the Basic Law now drafted by the BTC, the public deserves to know how much of their hopes and dreams for a fresh social order are embodied in that instrument,” Arnado said. “We appeal to President Aquino to reveal to the public the full text of the Bangsamoro Basic Law.”

She said making the document public would reassure stakeholders that its contents are “faithful, compliant and consistent with the Comprehensive Agreement on the Bangsamoro.”

Arnado said the people were starting to be discontented because they haven’t seen what the document at all.

“We are therefore alarmed that the parties are seemingly doing nothing to stave off the erosion of public confidence on the viability of their political settlement,” she said. “The longer these speculations persist, the greater the chance of eroding the public’s trust on the GPH-MILF peace process.”

When enacted, the Basic Law will serve as the charter of the new autonomous entity in Mindanao that is expected to embody meaningful self-governance for the Moro people. “As such, it will be among the principal measures that will make the letter and spirit of the CAB come to life,” she said.