Jinggoy Estrada still in as Binay running mate in 2016 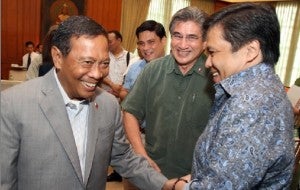 MANILA, Philippines–Don’t count him out yet.

Despite being arrested and jailed on plunder charges, Sen. Jinggoy Estrada remains on the opposition’s vice presidential list for 2016, Vice President Jejomar Binay said on Tuesday.

But Estrada should not expect Binay to visit him in jail soon with assurances that they will go on the stump together when the campaign for Malacañang opens two years from now.

The senator would have to wait until the busy leader of the opposition United Nationalist Alliance (UNA) finds the time to drop in on him in the 32-square-meter cell that he shares with rats and cockroaches in the Philippine National Police Custodial Center at Camp Crame in Quezon City.

Being Vice President, Binay is part of President Aquino’s Cabinet and he’s expected to stand as one with the administration in the campaign against official corruption.

But that is no reason for him not to visit a friend in jail.

“Why should I not visit [him]? When I have the time. He is a friend…. Why not? [Should our friendship end just because he has been charged]?” Binay said when asked by a reporter whether he had plans to visit Estrada in jail.

Estrada was arrested without bail on June 23 on charges that he embezzled P183.7 million from the Priority Development Assistance Fund (PDAF) in conspiracy with businesswoman Janet Lim-Napoles, alleged brains behind the P10-billion pork barrel scam.

He is detained next door to Sen. Bong Revilla, who was arrested, also without bail, on June 20 on charges that he pocketed P224.5 million in kickbacks from pork barrel-funded, phantom projects proposed by Napoles.

They are expected to be joined in the PNP Custodial Center by Senate Minority Leader Juan Ponce Enrile, who questioned the plunder charges filed against him by the Ombudsman in the Sandiganbayan.

Enrile is accused of embezzling P172 million from the PDAF in conspiracy with Napoles.

He is part of the triumvirate that leads UNA. The third alliance leader is Estrada’s father, former President and now Manila Mayor Joseph Estrada.

Senators Estrada and Revilla insist that the Aquino administration is singling out opposition lawmakers in prosecuting people responsible for the pork barrel scam.

But Binay thinks that view is “subjective.”

“Let’s see first how things will go,” he said when asked about it by a reporter.

Asked whether he thought the administration was fair in going after the people allegedly involved in the pork barrel scam, Binay said everyone had an interpretation of what was happening.

When asked whether Estrada was still being considered to be his running mate in the 2016 presidential election, Binay, who has declared his candidacy for President and who leads the early presidential polls, said the detained senator remained a contender for the vice presidency.

“Everyone is on the list. We are open to that. But it’s still early to say who will join us as the vice presidential candidate,” Binay said.

Not running under LP

Binay tried to scotch talk that he would end up running for president as a candidate of President Aquino’s Liberal Party.

The talk began last month when Mayor Estrada said he would run again for Malacanang if Binay would run as President Aquino’s candidate.

“You know, I cannot become a candidate of the administration because I’m from the opposition,” Binay said.

Told that President Aquino seemed to be implying in a speech in Iloilo City last week that Interior Secretary Mar Roxas would be the administration’s presidential candidate in 2016, Binay said the President had the right to choose his candidate, being a voter.

“That’s for him to decide. It’s not because he is President he cannot choose whom he will vote and support,” Binay said.

Binay urged the government to start moving now to ensure that vote-counting machines for the 2016 national elections are reliable and that there will be no cheating.

He maintained that the opposition has received information that there were forces out to rig the 2016 elections in favor of the administration.

Binay said he first sounded the alarm when he traveled to Iloilo during the weekend to make people aware of the need to make sure the 2016 elections are clean.

He said automated counting equipment could be used for cheating, noting that the precinct count optical scan (PCOS) machines used in the last elections remained problematic.

“In a sense, [I have apprehensions about the use of the PCOS] based on what I have heard that many of [the machines] are old and can no longer be used,” Binay said.

That is the reason, he said, why officials should start providing a budget for new and reliable vote-counting machines.

“Let’s look for a way to have equipment that have been shown to be reliable in other countries and that cannot be used for cheating,” Binay said.

Binay spoke to reporters on the sidelines of the 35th meeting of the Association of Southeast Asian Nations Senior Officials on Drug Matters at the Dusit Thani hotel in Makati City.