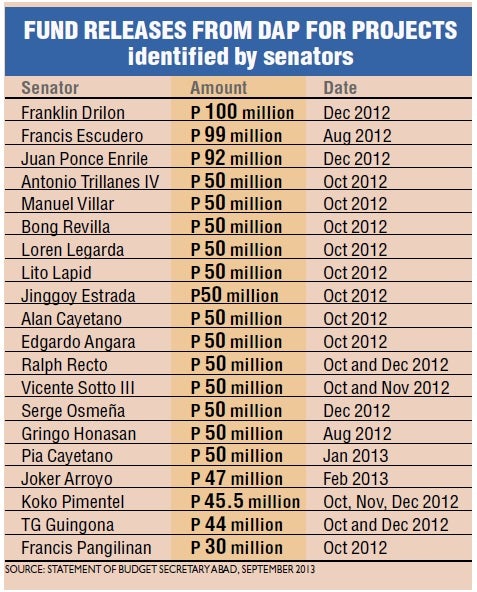 They have to return the money after the Supreme Court on Tuesday struck down as unconstitutional the Aquino administration’s savings-impounding mechanism otherwise known as the DAP.

“If the expenditure is illegal, you have to return it. There has to be restitution,” former National Treasurer Leonor Briones said, adding that 20 senators would have to return a total of P1.107 billion in lump-sum appropriations.

Budget Secretary Florencio Abad, said to be the chief architect of the stimulus program, earlier admitted that the senators had received the amount six months after they convicted impeached Chief Justice Renato Corona in May 2012.

In a landmark ruling, the Supreme Court on Tuesday declared unconstitutional the DAP, striking down the presidential budgetary prerogative, including a circular allowing the release of savings of the executive branch to agencies and projects outside the annual government budget approved by Congress.

In a unanimous vote, the high tribunal decided in favor of nine petitioners that decried the “presidential pork barrel,” the “National Budget Circular No. 541 and related executive issuances as unconstitutional.”

Thirteen magistrates voted to declare several acts under the DAP unconstitutional, while one member of the tribunal, Associate Justice Teresita de Castro, inhibited from the ruling penned by Justice Lucas Bersamin.

Several justices are expected to issue separate concurring opinions on the decision in the coming days, said court spokesman Theodore Te, who read the dispositive portion of the decision on Tuesday. The full decision, which came some six months since oral arguments were held on the consolidated case in January, has not been released.

The decision came as another blow to discretionary funds in government after the court nullified in November last year the controversial Priority Development Assistance Fund (PDAF) in the midst of allegations the congressional pork barrel allocations went to ghost projects and kickbacks.

In its decision, the Supreme Court said the DAP violated “the doctrine of separation of powers” and violated Section 25, Article 7 of the Constitution, which cited exemptions to the prohibition against the reappropriation of government funds.

The decision also voided the DAP provision allowing “cross-border transfers” of Malacañang’s savings “to augment the appropriations of other offices outside the executive.” It also barred the practice of “funding projects, activities and programs that were not covered by any appropriation in the General Appropriations Act.”

These acts constitute the gist of the nullified Department of Budget and Management Circular No. 541, which allowed the withdrawal of “unobligated allotments of agencies with low levels of obligations as of June 20, 2012, both for continuing and current allotments,” and the release of these funds to “augment existing programs and projects of any agency and to fund priority programs and projects not considered in the 2012 budget but expected to be started or implemented during the current year.”

The court also voided the practice of using “unprogrammed funds despite the absence of a certification by the National Treasurer that the revenue collections exceeded the revenue targets for noncompliance with the conditions provided in the GAA.”

The petitioners vowed to hold President Aquino, Abad and other top officials accountable for budget releases under the DAP, even while Malacañang had earlier discontinued the fund.

In a privilege speech in September 2013 defending himself in the pork barrel scam, Sen. Jinggoy Estrada alleged that senators who had voted to convict Corona had been “allotted an additional P50 million.”

“Where did the amount come from? I’m sure Secretary Abad knows the answer to this question,” he said then.

Abad later pointed to government savings pooled under DAP as the source of the amounts. But he denied that they had been used to pay off senators who voted in favor of Malacañang’s move to oust Corona, who was convicted by a vote of 20-3 following the Senate impeachment trial last year.

“Senator Jinggoy has been excoriated in public, mocked and laughed at,” she said. “But come to think of it, he actually did the public a favor by exposing the DAP and it did not obviously endear him with the administration.”

Estrada and Sen. Bong Revilla are under detention following charges they received PDAF kickbacks. Sen. Juan Ponce Enrile also has been indicted in connection with the PDAF scam.

Documents obtained by the Inquirer showed that DAP money jacked up the PDAF by P12.8 billion in 2011 and 2012. Congressional pork barrel amounted to around P24.8 billion in each of those fiscal years.

Seeking to separate DAP money from PDAF, President Aquino said in October 2013 that legislator-identified projects implemented through the stimulus program amounted to a “mere 9 percent” of government savings pooled by the Department of Budget and Management. DAP savings were pegged at P142.23 billion.

“Why, then, is the DAP being made an issue?” Aquino protested then.

That same month, the Inquirer reported that six administration senators requested in 2011 the amount of P100 million each for “priority projects.” That year, legislators were told that Malacañang had some P6 billion in “savings” available for projects they could nominate.

Also in 2011, Estrada and Revilla, along with Senators Ferdinand Marcos Jr., and Vicente Sotto III each asked for the release of P100 million.

But they allegedly channeled the amounts to nongovernment organizations identified with Janet Lim-Napoles, the supposed mastermind of the pork barrel scam, based on documents obtained by the Inquirer.

The backbone of the DAP is the little-known National Budget Circular No. 541, which enabled the DBM to collect “unobligated allotments of agencies with low levels of obligations as of June 20, 2012, both for continuing and current allotments.”

“This measure will allow the maximum utilization of available allotments to fund and undertake other priority expenditures of the national government,” Abad wrote in the circular.

The petitioners, including former Technical Education and Skills Development Authority Director General Augusto Syjuco Jr., asked the court to file criminal charges against those who created the DAP and benefited from it.

The complaint by the Philippine Constitutional Association (Philconsa) wanted the court to order the police, military and National Bureau of Investigation to seize the funds, assets or properties acquired through the use of DAP funds and turn these over to the national treasurer.

The Philconsa also asked the court to order the NBI and the Office of the Solicitor General to file charges against all persons who participated in the establishment of DAP, in the release and use of funds; and the recipients or beneficiaries.

The Bagong Alyansang Makabayan complaint asked that the finance and budget departments report to coordinate and make available to the Commission on Audit all documents, revenues and assets, including the proceeds from the sale of government assets and the dividends remitted to the government.–With a report from Jerome Aning

Read Next
Jinggoy Estrada still in as Binay running mate in 2016
EDITORS' PICK
DOH: 28,471 new COVID-19 cases in PH; active cases now 284,458
On Day 2 of implementation, gov’t says workers now exempt from ‘no vax, no ride’ policy
Over 3 Million worth of prizes to be won at Smart Padala’s SENDali Manalo Promo!
Acer starts the year off strong with the Aspire Vero National Geographic Edition
Metro Manila posts lowest temperature yet this ‘amihan’ season at 19°C
Gear up and get ready to play with Yamaha Mio Gear
MOST READ
Lucky plants to grow in 2022
Derek Ramsay on being married to Ellen Adarna: ‘Gumaan ‘yung mundo ko’
Cristalle Belo on raising her kids in Australia: ‘We set limits’
Unvaccinated has rights but also has limits—DOJ
Don't miss out on the latest news and information.