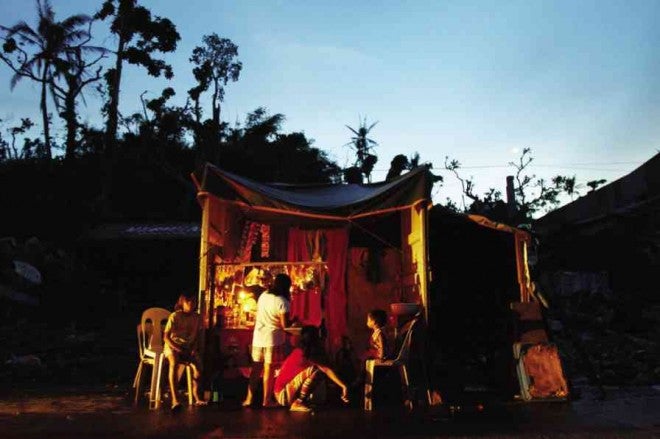 A CONTAINER becomes a temporary house for a family in Barangay Anibong in Tacloban City months after Supertyphoon “Yolanda” struck and left thousands dead and homeless. NIÑO JESUS ORBETA

TACLOBAN CITY, Philippines—Close to eight months after this city and parts of Eastern Visayas were flattened by Super Typhoon “Yolanda,” the actual number of deaths as a result of the world’s strongest storm in recent years has yet to be known.

The absence of a real casualty figure apparently followed President Aquino’s refusal to recognize the horrific effects of Yolanda in terms of lives lost.

Five days after Yolanda struck, initial estimates of the dead were put by some at 10,000. Aquino disputed the figure in a CNN interview on  Nov. 13 last year, or five days after.

He added that “there was emotional trauma involved with that particular estimate quoting both a police official and a local government official.”

Two days after the storm hit, Eastern Visayas Chief Supt. Elmer Soria told reporters that the death toll was estimated at 10,000, based on reports from village chiefs collected by Leyte Gov. Dominic Petilla. The police officer was later sacked.

Rey Gozon of the Office of Civil Defense (OCD) said the agency continued to receive reports of remains being found.

Skeletal remains that are found in this city are deposited in Barangay (village) Suhi and buried at the Holy Cross Cemetery in Barangay Tigbao.

“We cannot give the official number of deaths because up to this time, we still receive reports of [remains being] recovered,” said Gozon in a phone interview.

The OCD earlier placed the number of deaths in Eastern Visayas due to Yolanda at 5,894 people. And of this number, 2,689 were from Tacloban alone, considered Ground Zero of the storm.

Gozon said the OCD did not have a deadline to come up with the final death toll.

Fire Inspector Anthony de Paz, operations chief of the regional office of the Bureau of Fire Protection (BFP) based in this city, said they were still receiving reports of skeletal remains being discovered in villages.

The latest report they received was about the discovery of skeletal remains of storm victims in Villa Cinco in Barangay 87, San Jose District, one of the worst-hit areas in the city.

The remains were collected on June 26 by the fire department and a team from the Department of Public Works and Highways.

De Paz said authorities now relied on reports from villages on remains being found, unlike in the first few months after Yolanda struck on Nov. 8 last year when they had to search the villages for bodies.

“We just rely on phone calls and when we receive such information, we go to the barangay to recover the fragments of the person (believed to have died due to Yolanda),” De Paz said.

The BFP started collecting corpses in Tacloban hours after Yolanda made landfall.

The National Bureau of Investigation continues to try to identify unidentified bodies in the city.

The NBI has processed 2,255 bodies now buried at the Holy Cross Cemetery.

The NBI forensic work, however, will end on July 12. DNA samples are being taken from relatives of the dead for matching with DNA from corpses to help establish the identities of many of the dead. With a report from Raffy Antonio, Inquirer Research