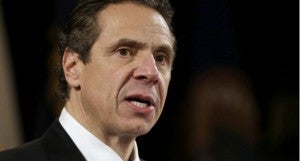 ALBANY, New York – New York state can end its three-decade HIV crisis by the year 2020, Governor Andrew Cuomo said Sunday as he announced an ambitious plan to deliver a knockout blow to the epidemic by boosting testing, reducing new infections and expanding treatment.

The governor said the state is aiming to reduce new HIV diagnoses to 750 by the end of the decade — about the same number of tuberculosis cases seen in New York City each year —down from 3,000 expected this year and 14,000 new cases of the disease in 1993. If the state is successful, it would be the first time the number of people living with HIV has gone down since the crisis began with the first widely reported cases in 1981.

“Thirty years ago, New York was the epicenter of the AIDS crisis,” Cuomo said. “Today I am proud to announce that we are in a position to be the first state in the nation committed to ending this epidemic.”

To expand treatment, the state’s Department of Health has negotiated bulk rebates with three companies producing HIV drugs. The state is also taking steps to make it easier to get tested, changing how HIV cases are tracked to ensure patients continue to receive treatment, and boosting access to “pre-exposure” drugs that can help high-risk people avoid infection.

Cuomo did not offer an estimate of the cost of the plan, but said it would end up saving the state more than $300 million per year by 2020 by reducing the amount the state pays for medical care for those with HIV.

Groups that have long advocated for HIV patients praised the governor’s announcement, saying it shows that efforts to fight the disease are paying off, and that a scourge that once seemed unbeatable can be successfully fought.

“We have the tools and know-how to end the AIDS epidemic in New York, the only question is whether we have the political will,” said Jason Walker, an organizer at VOCAL-NY, which advocates for low-income HIV patients. “Even without a vaccine or cure, Cuomo understands that we can dramatically reduce new infections below epidemic levels and ensure all people living with HIV achieve optimal health.”

While the state’s plan may sound overly optimistic, the number of new HIV cases in New York has dropped nearly 40 percent in the last 10 years because of better, faster tests; access to condoms; public outreach campaigns and other initiatives. Meanwhile, those with the disease are living longer thanks to significantly more effective treatments.

The goal of bringing the disease to below epidemic levels “is ambitious,” said Mark Harrington, executive director of the anti-HIV organization Treatment Action Group, but “grounded in reality.”