MANILA, Philippines – The two-year-old son of Vilma Mijares, Liamuel, was diagnosed with stage four Neuroblastoma, a nerve cancer common in infants and toddlers.

Two months after baby Liamuel was diagnosed, Vilma brought him to the Philippine Children’s Medical Center (PCMC) in March.

“They readily admitted my son even when I had nothing to pay them,” a tearful Mijares told INQUIRER.net. 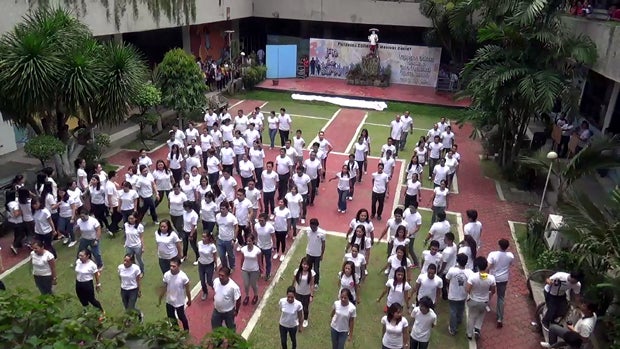 But with the impending eviction of the PCMC from its 3.7-hectare land, not only would Mijares feel the loss, but also the entire workforce of the hospital.

Hundreds of doctors, nurses and staff danced and flash mobbed to protest the government’s apathy towards the decades-old hospital for children in Quezon City.

Clad in white shirts, about 300 health workers danced to Michael Jackson’s “They Don’t Care About Us” as they opposed a proposal by the Department of Health (DOH) to shut down the PCMC, disrupting its services and affecting thousands of children currently admitted in the hospital along Agham Road corner of Quezon Avenue.

On March 28, Health Secretary Enrique Ona visited the PCMC and offered an “option” to modernize the facility compound and move it to the Lung Center of the Philippines Compound, also on Quezon Avenue.

Joined by groups #SavePCMC Alliance, Samahan ng Kawani ng PCMC and Akap Bata, the hospital staff demanded an explanation from President Benigno Aquino III and Ona on the decision to close down the hospital.

Specializing on cancer and infectious diseases, the PCMC, which sits on a 3.7-hectare property, serves around 80,000 out-patients and admits 55,000 annually.

Women’s alliance Gabriela also expressed support to PCMC health workers, stressing that the relocation of the hospital was being taken advantage of by “big developers” for land profit.

Replacing the PCMC on the 3.7-hectare land is a high-rise building, with its developer still unnamed.

“By transferring the PCMC, it is clear that the government values more the profits they could get from these businessmen than the health care of Filipino children,” Gabriela representative Emmi de Jesus said.

Save the philippine childrens medical center