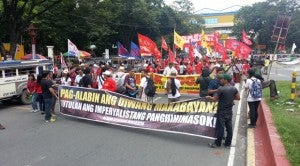 Militant groups march to the US embassy Thursday to protest the Edca. MATIKAS SANTOS/INQUIRER.net file photo

MANILA, Philippines–Government workers and cause-oriented groups have joined the call for the Supreme Court to declare as unconstitutional the Enhanced Defense Cooperation Agreement (Edca).

In a 34-page petition in intervention, Kilusang Mayo Uno (KMU) together with Confederation for Unity, Recognition and Advancement of Government Employees (Courage) and the National Federation of Labor Unions-Kilusang Mayo Uno told the high court on Friday that the Aquino government committed grave abuse of discretion and violated the Constitution when it signed the Edca with the United States.

The groups said the constitutional provisions violated by the agreement include those pertaining to the preferential use of Filipino labor and domestic materials; tax exemption; national sovereignty, territorial integrity, and national interest; freedom from nuclear weapons; role of the judiciary in settling disputes; autonomy of local government units; and treaties with other countries, specifically military treaties.

Petitioners also said it was necessary to stop its implementation while the petition is pending.

“The acts of respondents, if not immediately restrained or enjoined will cause grave and irreparable injury to petitioners-in-intervention as citizens of the Republic of the Philippines and as tax payers since the implementation of the assailed provision of Edca is a violation of the 1987 Constitution,” petitioners said.

However, the high court did not issue a restraining order but required the government to comment on the petitions.

Petitioners believe that the Edca permits the US government to establish military bases anywhere in the Philippines, allowing them to build structures and store and preposition weapons, defense supplies and materiel, station troops, civilian personnel and defense contractors, and transit and station vehicles, vessels and aircraft.

Manila and Washington insisted that the Edca would not set the stage for the return of American military bases to the Philippines, unless backed by a treaty ratified by the Senate.

“As there was no treaty concurred in by the Senate it follows that the Edca is unconstitutional,” the petition read.

The Edca, which has an initial term of 10 years, was signed in time for the state visit of US President Barack Obama on April 28, 2014, as part of his four-nation Asian tour.