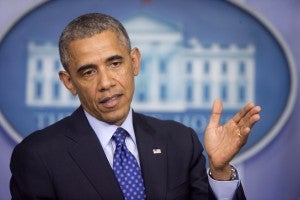 WASHINGTON — The US House of Representatives will vote next month on legislation authorizing a campaign-season lawsuit accusing President Barack Obama of failing to carry out the laws passed by Congress, Republican Speaker John Boehner announced on Wednesday.

In a memo distributed to House members, Boehner accused Obama of “aggressive unilateralism” and said if left unchecked, it would give the president “king-like authority at the expense of the American people and their elected legislators.”

White House press secretary Josh Earnest dismissed any suggestion that the president has failed to act within the law in issuing executive orders or taking other actions. “We feel completely confident that the president was operating within his authority as the president of the United States to take these steps on behalf of the American people,” he told reporters.

Whatever the outcome of the suit in the courts, Boehner’s announcement guarantees creation of yet another political struggle between Republicans and Obama and his Democratic allies in a campaign already full of them.

“On matters ranging from health care and energy to foreign policy and education, President Obama has repeatedly run an end-around” on the American public and Congress, the speaker wrote. He accused him of “ignoring some statutes completely, selectively enforcing others and at times, creating laws of his own.”

At a news conference, Boehner strongly brushed aside a question of whether impeachment proceedings could result from the suit.

In his memo, he stopped short of accusing the president of violating his oath of office. Instead, he said Obama was “straining the boundaries of the solemn oath he took on Inauguration Day.”

Other Republicans have been less restrained. Rep. Lou Barletta, a Republican, said recently the House probably has the votes to impeach Obama, although he said he wasn’t calling for it. One former tea party-backed lawmaker, ex-Rep. Allen West of Florida, has called for the House to vote to remove the president from office.

Boehner also rejected a suggestion that the suit was a political move designed to give traditional Republican voters an added impetus for going to the polls in November when control of Congress will be at stake.

But Rep. Steve Israel, who chairs the Democratic campaign committee, said Boehner planned a “politically motivated lawsuit,” and predicted the voters would punish Republicans for it.

He accused the speaker of a “reprehensible waste of taxpayers’ money and a desperate political stunt meant to gin up the Republican base at a time when House Republicans are historically unpopular.”

Disputes about the balance of power between the executive branch and the Congress are as old as the Constitution under a system in which lawmakers pass laws and the president carries them out.

Boehner said the House “must act as an institution to defend the constitutional principles at stake.”

Obama: US must lead globally but show restraint

Hillary for president? Three reasons for and against