Hillary for president? Three reasons for and against | Inquirer News
Close
menu
search

Hillary for president? Three reasons for and against 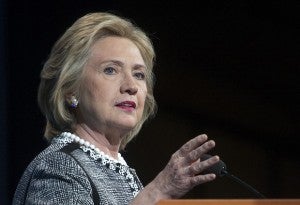 WASHINGTON–“I have to make the decision that’s right for me and the country.”

Hillary Clinton froze the 2016 White House race when she told ABC News she will likely wait until year’s end to decide whether to try to succeed Barack Obama as president.

“I don’t think there’s anybody in the country except former presidents who has her credentials,” Vermont ex-governor Howard Dean, himself a 2004 presidential candidate, told AFP.

Along with her 2001-2009 tenure in the US Senate and her four years as secretary of state, Hillary also rubbed shoulders with world dignitaries while she was first lady to husband Bill Clinton. She has known German Chancellor Angela Merkel since 1994, and has negotiated with several heads of state, including Russia’s Vladimir Putin and China’s Hu Jintao.

Another advantage: President Clinton remains popular, with a 63-percent approval rating according to a recent ABC-Washington Post poll.

Rarely in recent decades has a prospective candidate been so far out front: more than 50 points ahead of hypothetical rival Democrats, and comfortably leading possible Republican challengers including president George W. Bush’s younger brother Jeb.

“Her image is very positive and, in many ways, it’s grown more positive over time,” Bowman said.

As a successor to 44 men, Hillary Clinton would make history by becoming the first female commander-in-chief. Since her defeat in the 2008 primaries, she has often repeated a political mantra of sorts: “break down that highest, hardest glass ceiling.”

“This is one of the great sort of myths and falsehoods out there, that women are able to attract women voters,” Brown told AFP. “Women vote for their political party over their gender.”

“The Obama-Clinton foreign policy proved erratic and failed to deliver any signature diplomatic achievement,” the anti-Hillary organization America Rising wrote in an e-book unveiled Tuesday that serves as a 140-page conservative counterattack.

Republicans have assailed Clinton for failing to deliver concrete results, calling her out for passivity during the 2009 protests in Iran, naivety with Russia, and inability to staunch the Syrian civil war or unlock stalled Israeli-Palestinian negotiations.

Her final grade: “F,” according to a potential 2016 adversary, Senator Marco Rubio.

A video clip may well haunt her on the campaign trail, and it comes not from Libya but Washington.

Clinton faced a January 2013 grilling from senators demanding answers about what specifically triggered the 2012 attack that killed four Americans.

“What difference, at this point, does it make?”

Republicans blamed the State Department for security shortcomings at US missions, conditions they argue contributed directly to the Libya tragedy.

A House select committee investigating Benghazi is likely to subpoena Clinton, who has denounced the probe as a charade.

Clinton turns 69 shortly before the 2016 election, Ronald Reagan’s age when he became the oldest president-elect in 1980.

Republicans have implied Clinton’s age and health are legitimate issues, especially since she suffered a concussion after a fall in late 2012.

Clinton insists her health is 100 percent. “My mother lived with us until her death at 92,” she told ABC, as she pledged to release her health records should she become a candidate.