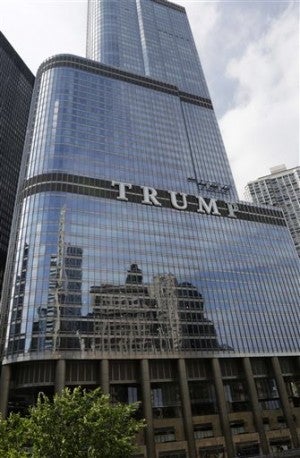 CHICAGO—The installation of 20-foot (six-meter)-tall letters spelling out T-R-U-M-P on the side of the billionaire’s gleaming Chicago skyscraper has triggered a war of words between Donald Trump and Rahm Emanuel — with the city’s mayor saying he’s looking for a way to undo the “architecturally tasteless” sign, and the developer in no mood to take anything down.

The spat pits the abrasive billionaire and relentless self-promoter who turned the words “You’re Fired!” into a personal motto against a mayor who did not get nicknames like “Rahmbo” and “The Rahminator” because he shies away from a fight.

The backdrop is a city that takes its architectural history seriously, where adorning some of the tallest and largest buildings on the planet with the owner’s name is seen as poor form.

“If this sign was in Atlantic City or Las Vegas, nobody would care — but it is in Chicago, and in a part of Chicago full of great buildings from the 1920s to the 1960s and onward,” said Blair Kamin, a Pulitzer Prize-winning architectural critic for the Chicago Tribune, who became part of the scuffle with his withering criticism of the Trump sign. “None of the other towers have signs on them.”

In fact, many of the city’s tallest buildings have large signs near or at ground level, but not even landmarks like the John Hancock Center and the Willis Tower have the kind of banner — high above street level — that the Trump International Hotel & Tower does.

For his part, Trump blames Kamin, whom he calls a “third-rate architecture critic,” for stirring up trouble when the letters recently began to appear on the side of the building.

Trump also stressed that he got city permission to put up exactly the sign that ultimately was emblazoned on the building. Not only did the city zoning administrator sign off on it, he said, but the City Council did as well.

“We got full approval,” Trump said, a preview of an argument that will certainly come up if the city tries to bring his name down.

But perhaps more important than any legal argument he might make, Trump said he’s baffled that anyone would object to the sight of his name on the side of the building, going so far as to suggest that they should be thanking him.