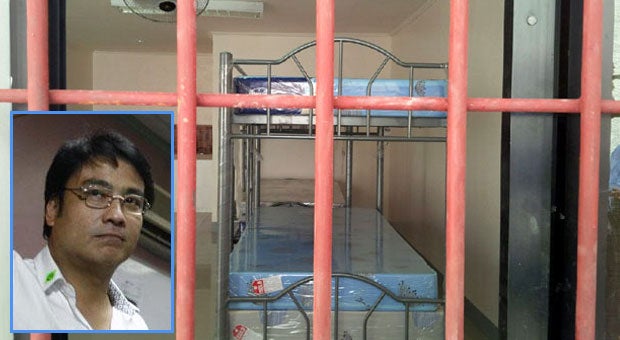 The Ombudsman has amended the plunder charges it filed earlier against Sen. Bong Revilla (inset photo)to place on him the central culpability for the pork barrel scam instead of on businesswoman Janet Lim-Napoles, the alleged brains behind the embezzlement of P10 billion in public funds. INQUIRER.net/PDI PHOTOS

MANILA, Philippines–The Ombudsman has amended the plunder charges it filed earlier against Sen. Bong Revilla to place on him the central culpability for the pork barrel scam instead of on businesswoman Janet Lim-Napoles, the alleged brains behind the embezzlement of P10 billion in public funds.

Prosecutors headed by Deputy Special Prosecutor John Turalba submitted to the Sandiganbayan First Division on Tuesday new plunder information to amend the one the Ombudsman filed on June 6 against Revilla and his four coaccused.

Similar amendments are expected to be filed in the cases against Senators Juan Ponce Enrile and Jinggoy Estrada and their coaccused in the antigraft court’s Third Division and Fifth Division.

“This is an apt adjustment in the plunder case because it should be a public official who amassed the illegal wealth, with everybody else a coconspirator,” Baligod said in a text message to the Inquirer.

The prosecutors said the information, which detailed the charges against the accused, could still be amended before the arraignment.

The Ombudsman’s amendment came after Napoles’ lawyer questioned in court last week the government’s case for plunder, as the information portrayed Napoles as the central figure who allegedly instigated and gained from the pork barrel scam.

Lawyer Stephen David argued that being a private citizen, Napoles should not have been charged with plunder, as plunder is a crime committed by public officials who illegally amass in a series of transactions at least P50 million in public funds.

In their amended information, the prosecutors stressed that it was Revilla who amassed P224.5 million in public funds in connivance with his staff member Richard Cambe, Napoles, her driver-bodyguard Raymund de Asis and her nephew Ronald John Lim.

The prosecutors wanted to delete the phrase in the original information that stated the pork barrel scam enabled “Napoles to misappropriate the Priority Development and Assistance Fund (PDAF) proceeds for her personal gain.”

Instead, the prosecutors emphasized, Revilla “was the one who amassed, accumulated and acquired ill-gotten wealth in connivance or in conspiracy with his coaccused public officer and private individuals.”

They alleged that Revilla exerted “undue pressure on the implementing agencies” to approve his endorsements and ensure that his PDAF funds were assigned to Napoles’ bogus nongovernment organizations.

“Undue pressure and endorsements were made in exchange for kickbacks, percentages or commissions, thereby unjustly enriching himself at the expense and to the damage and prejudice of the Filipino people and the Republic of the Philippines,” they said.

Bruce Rivera, another lawyer for Napoles, said Wednesday the amendments would not change the nature of the case.

“There is still conspiracy. The act of one is the act of all,” Rivera said.

Revilla and his 31 coaccused will be arraigned on plunder and graft charges in the First Division on Thursday.

The prosecutors said the changes in the plunder information “do not alter the prosecution’s theory of the case so as to cause surprise to the accused and affect the form of defense he has or will assume.”

Revilla and Cambe are detained in the Philippine National Police Custodial Center at Camp Crame. They were arrested on June 20.

Estrada joined them in detention on Monday after the Sandiganbayan Fifth Division issued arrest warrants for him and his 25 coaccused.

Napoles has been detained in a police camp in Laguna province since August last year on illegal detention charges brought against her by Benhur Luy, her nephew and former aide who blew the whistle on her alleged racket.–With a report from Gil C. Cabacungan

PNP gears up for first court appearance of Bong Revilla