House urged to probe dropping of Filipino as a college subject 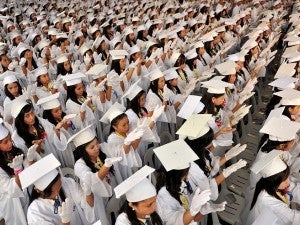 MANILA–Philippines–A party-list lawmaker wants the Commission on Education (CHEd) investigated by the House of Representatives for ordering the removal of mandatory Filipino subjects from the curriculum of colleges and universities, insisting that there was still a need for students to study Filipino at higher levels.

The CHEd last year issued Memorandum Order 20 removing Filipino subjects from the general education curriculum (GEC) at the tertiary level. The measure is to take effect in 2016.

Kabataan party-list Rep. Terry Ridon said the CHEd decision should not go unscrutinized, and has asked the House committee on higher and tecnical education to look deeper into the matter.

“CHEd’s decision to remove the mandatory study of our national language is troubling. While CHEd explained that the subject is already taught under the K to 12 program, there remains the need for the study of the Filipino language at a higher level,” he said in a statement.

Under the curriculum, the GEC units have been reduced to 36 units for all students, from 63 to 51 units, depending on the courses.

The mandatory units for Filipino subjects, as well as several other subjects, have also been removed, with the CHEd reasoning that the senior high school curriculum under the K to 12 program already requires 108 hours of Filipino subjects for Grade 11. The CHEd also said it removed subjects that duplicated those in grades 11 to 12.

Ridon said the CHEd order has been opposed by various sectors, including the academe, writers and language experts, who are concerned that Filipino departments in colleges and universities would be shut down because of the removal of these subjects, and teachers of Filipino subjects would be laid off.

He was also unsatisfied with the explanation of the CHEd that under the memorandum, GEC courses may be taught in English or Filipino, with the discretion left to the schools.

“Teaching the GEC curriculum in the Filipino language is not tantamount to teaching tertiary-level Filipino courses,” he said.

“Congress will also study the possibility of legislating a law that would require at least nine units of Filipino courses for all college students, as prescribed by experts in this field,” Ridon said.

Rep. Roman Romulo, the chair of the House higher education committee, said he had talked with CHEd officials who may issue a new directive requiring nine units to be taught in Filipino, after consultations with stakeholders.

He noted concerns that if schools would be left to choose whether to teach in English or Filipino, many might just opt for English. These concerned groups insist there should still be subjects in Filipino.