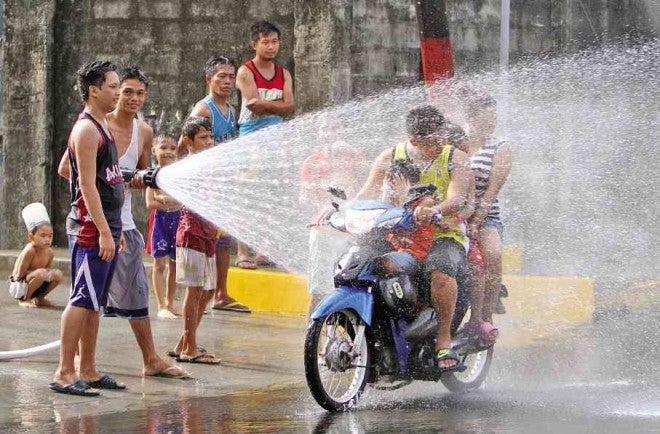 The Wattah-Wattah Festival of San Juan City Tuesday, June 24, 2014, was marred by the killing of lawyer Solomon Condonuevo who was taken hostage on the same day by Charlemaene Aton, 35, a security guard in the building where Condonuevo held office. Aton committed suicide after holding hostage and then killing Condonuevo following an argument over the lawyer’s missing car keys. LYN RILLON

MANILA, Philippines–After almost 10 hours of negotiations, the hostage-taker was beginning to “soften up”—until he heard a vehicle siren wailing in the street. Thinking that a police assault was under way, he panicked, became more desperate and finally made good his threat to shoot his captive.

The sound he heard, however, was not from a patrol car but from a fire truck announcing the start of the Wattah-Wattah Festival of San Juan City.

Killed were lawyer Solomon Condonuevo, 62, of Barangay (village) Little Baguio, San Juan; and Charlemaene Aton, 35, a security guard at the four-story First Optima Realty Corp. building on F. Roman Street, where the lawyer held office on the first floor. The guard shot the lawyer in the head with a .38-cal. revolver before shooting himself also in the head.

An investigation showed that a heated argument broke out between Aton and Condonuevo around 10:50 p.m. on Monday, when the lawyer—who often worked late—could not find his car keys.

“They were both about to leave and the lawyer was said to be not in a good mood that night. He vented his anger on the security guard,” Daniel said, quoting witnesses.

The fight between the two men turned into a hostage situation, with Aton drawing his service firearm, detaining Condonuevo and holding him at gunpoint inside his small law office.

The witnesses called for the police but the crisis dragged on for hours. Aton made a series of demands—including a communication line to President Aquino and US President Barack Obama.

A Visayan translator had to be called since the hostage-taker would not speak in Tagalog. San Juan City Mayor Guia Gomez was alerted to the situation and the local government’s crisis management committee went to work to help the police.

Aton, a resident of Sampaloc, Manila, also asked for his former girlfriend, his sister, and a plane ticket to Dipolog, Zamboanga del Norte—but would not yield after his sister showed up to pacify him.

By early Tuesday morning, Daniel said, Aton had “softened up” and was talking more calmly and coherently to the police. “He asked that no cases be filed against him. He asked that the lawyer write an agreement stating that he will not file charges and that they would go straight to the prosecutor’s office to have the agreement notarized.”

“Then suddenly he shouted as he looked out (the window) and heard the noise outside. He thought there was an assault team coming because he heard a siren.”

But what Aton heard was the fire truck announcing the start of Wattah-Wattah, Daniel said.

Shortly after, around 7:30 a.m., a shot rang out from inside the office, followed by another shot five minutes later.