Enrile: Too old to jail? 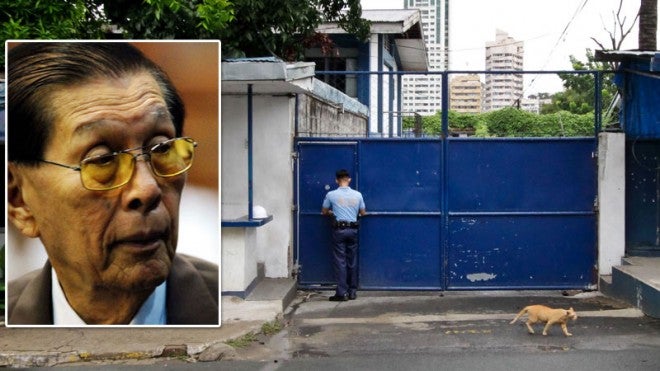 TOKYO—President Aquino on Tuesday said jailers should be considerate toward the 90-year-old Sen. Juan Ponce Enrile when he is arrested on plunder charges stemming from his alleged misuse of the Priority Development Assistance Fund (PDAF).

“It seems there should be consideration to that, that is an established fact … I’m sure the courts are cognizant of fulfilling the obligations but at the same time, having as a factor the advanced age of Senator Enrile,” the President said at a press conference.

Aquino recalled that when he was in the Senate with Enrile, the latter was already reading with a magnifying glass and constantly used eye drops.

The Constitution itself, under the Bill of Rights, states that “cruel, degrading or inhumane punishment” should not be inflicted on a person, the President said.

He did not say whether Enrile should just be placed under house arrest.

Enrile, a former Senate President who presided over the impeachment trial and conviction of then Chief Justice Renato Corona, has been charged with plunder and graft in connection with the P10-billion pork barrel scam.

The Sandiganbayan division assigned to handle his case is expected to issue an arrest warrant against him any time now.

Two other senators—Bong Revilla and Jinggoy Estrada, who are also charged with plunder and graft for allegedly pocketing kickbacks in the same alleged pork barrel scam—are now detained at the Philippine National Police Custodial Center in Camp Crame.

Enrile allegedly funneled P683 million of his allocations from the PDAF to phantom projects proposed by Janet Lim-Napoles through bogus nongovernment organizations (NGOs) from 2004 to 2012, getting 50 percent in kickbacks.

Revilla is accused of plowing P1.2 billion of his PDAF allocations into Napoles’ NGOs, also allegedly receiving 50 percent in kickbacks from every project.

Estrada is allegedly the biggest contributor to Napoles’ scam, channeling P1.6 billion of his PDAF allocations to ghost projects through the NGOs.

The Inquirer tried to contact the lawyer of Enrile to get his reaction to Aquino’s statement about the senator but he did not reply to text messages and phone calls.

Even close friends of the senator declined to talk about him and his case.

Enrile said last week that should he be arrested he would bring books on the history of political thought, on Nelson Mandela and on poetry.

He said he would prove his innocence.

“I assure you that as long as I breathe, I have the strength and can still think, I will fight for the truth,” Enrile told officials from his home province of Cagayan who traveled to Manila to sympathize with him.

Enrile is not unfamiliar with life in jail. He was charged in February 1990 with rebellion and murder for his alleged participation in a military coup against President Corazon Aquino in December 1989.

He was arrested and detained at Camp Karingal in Quezon City, but was allowed to post bail by the Supreme Court a week later. The Supreme Court invalidated the rebellion charges against him in June 1990.

A house arrest for Enrile is expected to draw howls of protest from people accusing the government of double standard—a special detention facility for the three senators and crammed cells for ordinary citizens.

Putting the three senators in a regular jail will prevent the perception that justice is “two-tiered” in this country, Sen. Miriam Defensor-Santiago said in April.

In an open letter to Aquino, John Silva, the executive director of the Ortigas Foundation Library, slammed the government’s supposed special treatment of Revilla by giving him a newly constructed room for a detention cell at the PNP Custodial Center.

Estrada is also housed in a similar detention cell at the Custodial Center.

Silva wrote in his letter that the jail conditions of the President’s father, the late Sen. Benigno “Ninoy” Aquino Jr., during the Marcos dictatorship was much worse than that of Revilla, considering that the elder Aquino was not jailed for stealing.

“He was into more heady stuff like a return to democracy, human rights and moral convictions,” Silva said.

Reacting to the open letter, Aquino said the government was only executing the court’s orders on the detention of Revilla and Estrada.

But for the President, it seemed difficult to make a comparison between his father’s experience and the situation of Estrada and Revilla.

Instead, Aquino described how it was to be incarcerated during martial law.

Despite having an air conditioner at some point, his father’s cell was bugged by authorities among others.

But perhaps worse of it all was that his father was placed in solitary confinement.

“For somebody who is a very sociable being like my dad, that solitary confinement was really, shall we say, mental torture,” the President said.–With a report from Christine O. Avendaño

3 senators should be jailed in regular cells, says poll