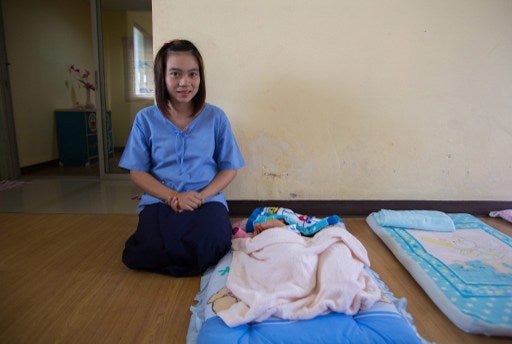 This picture taken on November 22, 2013 shows Thai female inmate Mai, 27, who was sentenced to three years in jail after she was caught with 20 illegal methamphetamine pills, known locally as “yaba”, posing with her then one month-old son at a prison in Ayutthaya, north of Bangkok. AFP FILE PHOTO

AYUTTHAYA — Lured by easy money, an escape from poverty or family pressure, thousands of women are locked up for drug offenses in Thailand, which has one of the world’s highest rates of female imprisonment.

Mai, 27, was sentenced to three years in jail after she was caught with 20 “yaba” pills — a slang term for methamphetamine known locally as “crazy medicine” — used by tens of thousands of Thais from taxi drivers to students.

“The amount of yaba was more than was considered for personal use so I was charged with selling,” said Mai, whose boyfriend is also in prison for dealing methamphetamine.

She is serving her second stint behind bars in a prison in Ayutthaya north of Bangkok where she lives with her baby boy, and has no hope of early release in a country with one of the world’s strictest anti-drugs policies.

A three-year jail sentence for meth possession is routine in Thailand, where use of the illegal stimulant is rife.

Within Asia, the kingdom is second only to China in terms of methamphetamine seizures.

More than 95 million meth tablets were seized in Thailand in 2012, up almost five-fold from 2008, according to the UN Office on Drugs and Crime (UNODC).

Much of the region’s meth is produced in strife-torn border areas in neighboring Myanmar and smuggled across the border.

Thailand saw nearly 196,000 methamphetamine-related arrests in 2012, the most in Asia, according to UNODC.

At the prison in Ayutthaya, the walls of the children’s room are covered with drawings.

But despite the flower beds that welcome visitors and the hair salon, life is no picnic with prisoners required to carry out cleaning and other tasks, said Mai, dressed in the same light blue uniform as the 650 other inmates.

The prisoners sew beads on T-shirts for a salary of just 100 baht ($3) a month, with the proceeds of the sales going towards the operating budget of the prison.

In a country without a culture of socio-educational support for inmates, one Thai writer is trying to change her compatriots’ views of prison.

“We want the society to look at the prisoners as human beings. Everyone can make mistakes or be jailed as a scapegoat,” Orasom Suddhisakorn said.

The stories are familiar — of ordinary women sentenced to years in prison for a handful of yaba pills.

As a young penniless divorcee, one inmate wrote of how she sold the drug to raise her son, while another recounts how her foreign boyfriend manipulated and used her as a mule.

A third tells how she sold drugs to follow the tradition of her family, in which everyone, from her aunt to her mother, lived from meth trafficking.

At one of the workshops, attended by about 20 inmates, 23-year-old Sawapa said writing “helps me to organize my thoughts.”

“It makes me think of the past, of my family, of how I lived,” she added.

Sawapa, who was jailed for possession of 30 yaba pills, recounts being led by a neighbor into small-time dealing while she was a student.

Her mother wants her to resume her studies and eventually take over the family grocery store. But her release date is not until 2018.

This tough treatment of small-time traffickers is one reason why Thailand has one of the world’s highest rates of women prisoners.

Roughly 42,000 women are behind bars in Thailand — about 14 percent of the total imprisoned population, according to the corrections department.

That compares with around nine percent for the United States, five percent for China and zero percent for Liechtenstein, according to the International Center for Prison Studies.

Nearly half of the female inmates in Thailand are serving sentences for trafficking or possession of meth.

At the Ayutthaya jail, the figure is 80 percent, according to the prison director.

Orasom, the writer, is one of the rare voices to advocate a better support for prisoners.

But some other activists are calling for a reduction of prison terms for drugs, arguing that the harsh policy — which can result in decades in jail — has failed to curb dealing.

“People get 20, 30 or 40 years when it would be three years in other countries,” said Danthong Breen of rights group Union for Civil Liberty.