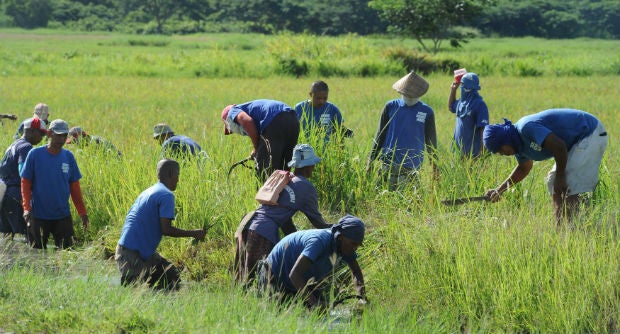 In this photo taken on June 6, 2014, inmates from the medium security compound work on a rice field at Iwahig prison in Puerto Princesa, Palawan island. Bounded by a mangrove forest-choked coast, a mountain range and a highway to Puerto Princesa city, 14 kilometres (8.7 miles) away, Iwahig is one of the world’s largest open prisons, as well as one of the country’s oldest correctional institutions. AFP

IWAHIG, Philippines – One hundred convicts armed with machetes wander through a vast prison without walls in one of the Philippines’ most beautiful islands, a unique approach to reforming criminals.

Two token guards with shotguns slung on their shoulders relax in the shade nearby as the blue-shirted group of inmates chop weeds at a rice paddy at the Iwahig Prison and Penal Farm on Palawan island.

But Arturo, who is 21 years into a life sentence for murder, has no plans to escape, preferring to keep his chances of an eventual commutation or even a pardon.

“I don’t want to live the life of a rat, panicked into bolting into a hole each time a policeman comes my way,” the 51-year-old inmate, whose full name cannot be used in keeping with prison regulations, told Agence France-Presse.

Surrounded by a thick coastal mangrove forest, a mountain range and a highway, the 26,000-hectare (64,000-acre) Iwahig jail is one of the world’s largest open prisons, more than two times the size of Paris.

A single guard sits at its largely ceremonial main gate, routinely waving visitors through without inspection.

A shallow ditch, but no walls, is all that separates the 3,186 prisoners from the outside world.

A mere 14 kilometers (nine miles) away is Puerto Princesa, a city of 250,000 people and a top tourist destination as the gateway to an island famed for stunning dive sites, a giant underground river system and beautiful beaches.

A steady stream of local and foreign tourists visit Iwahig’s quaint, pre-World War II prison administration buildings and a handicrafts shop, which is manned by inmates who have made the items on sale.

A few hundred hectares of the land is devoted to rice paddies, which sit picturesquely on either side of a fire-tree-lined dirt road. Ducks, goats, cattle and egrets feed quietly on newly harvested plots.

Fish ponds, coconut plantations, corn fields and vegetable plots are scattered across the prison, although the bulk of the land remains covered by forest and mangroves.

US colonial rulers established Iwahig in 1904 for political prisoners and Manila’s worst inmates, seeking to isolate them in what was then a sparsely inhabited frontier about 600 kilometers (370) miles from the nation’s capital.

Prisoners were used to clear virgin rainforests for farming, which would in turn encourage migration from the archipelago’s more populous areas.

After the Philippines won independence post-World War II, those who had served out their term were also given the option to clear and own up to six hectares of land.

Up until the 1970s, the prisons had much tougher security than today, with chain gangs of inmates the norm.

Most other jails in the Philippines continue with brutal conditions, with inmates packed beyond capacity in dingy, airless cells and having to take turns sleeping.

A fresh breath of reform

But at Iwahig, and four smaller penal farms in other provincial areas, authorities have sought to take advantage of the open spaces to create conditions that encourage the rehabilitation of inmates.

“This (farm work) serves as their preparation for getting back into a free society once they are released. It helps them adapt back to life as free men,” said prison superintendent Richard Schwarzkopf.

Instead of the squalid, sardine can-like cells of Bilibid, night quarters for most of Iwahig’s inmates are lightly guarded buildings that are bigger than a basketball court, surrounded by barbed wire rather than concrete or metal walls. 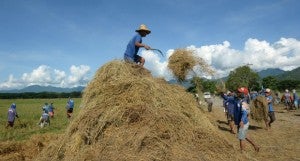 In this photo taken on June 6, 2014, inmates from the medium security compound work on a rice field at Iwahig prison in Puerto Princesa, Palawan island. Bounded by a mangrove forest-choked coast, a mountain range and a highway to Puerto Princesa city, 14 kilometres (8.7 miles) away, Iwahig is one of the world’s largest open prisons, as well as one of the country’s oldest correctional institutions. AFP

About 50 lucky minimum-security inmates live full-time in straw-and-bamboo huts scattered along the penal farm, assigned to guard the crops, tractors and other implements.

There are just 150 maximum-security inmates who must work indoors and remain in a more tightly secured environment.

However, murderers and other previous maximum-security prisoners can qualify for the outdoors if they have served at least half their sentence and have a record of good behavior. A life sentence is regarded as a 40-year term.

Schwarzkopf said the modern approach to penology had been a success. He said less than 10 percent of Iwahig’s prisoners became repeat offenders after being released, lower than the national average.

The jail has also had no recent history of riots or mass breakouts.

Schwarzkopf said there had been just one breakout since he took over leadership of the prison in 2012: involving four inmates serving terms for murder, attempted murder and car theft.

Three of them were swiftly captured, according to Schwarzkopf, although he declined to say which one of the four remained at large.

“Riots are a sign of depression brought about by prison conditions. These usually happen at places where people are kept behind bars,” Caabay said.

Convicted drug dealer Gamay, 39, said he treasured his time working the land as it helped him keep his mind off his wife, who had left him for another man.

“It stops me thinking bad things,” said the stocky, tattooed former fish vendor, who began his 30-year sentence in Manila’s Bilibid but was transferred to Iwahig seven years ago.

Gamay said living at Iwahig had allowed him to dream and prepare for a successful life back in society.

“The work experience helps you learn to stand on your own two feet… I want to go back to selling fish and save up to build my own house,” he said.