Facing the perils of white-water rafting 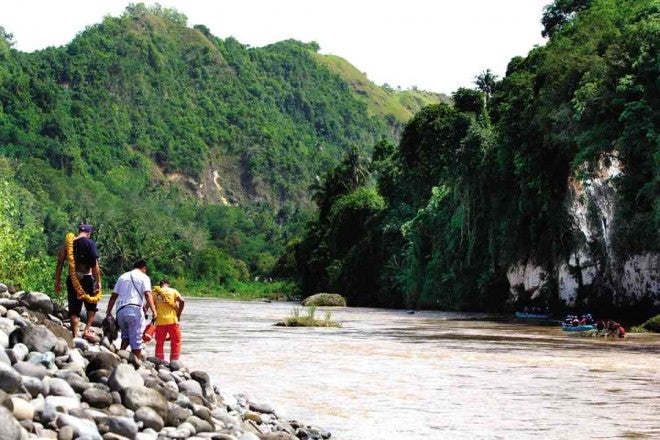 VOLUNTEERS scour the banks of Cagayan River in Cagayan de Oro City for the tourist who went missing and was found dead while going white-water rafting in the river, one of the city’s main tourist attractions. JB R. DEVEZA

CAGAYAN DE ORO CITY—The tragedy that left a tourist dead in Cagayan River on June 13 is pushing city officials and tour operators to draft a set of safety protocols for white-water rafting.

In the wake of the accident that killed tourist Aizza Mae Balbin, a 26-year-old nurse from Loboc, Bohol province, Mayor Oscar Moreno formed a task force to look into means to protect white-water rafting enthusiasts and tourists.

Balbin’s was the first death recorded as a result of white-water rafting in Cagayan River since the activity was introduced as a tourism feature in 1995.

The regional office of the Department of Tourism (DOT) estimated that some 1.3 million tourists visit the region annually. Some 50,000 of these go on white-water rafting tours, pouring millions of pesos into local business establishments like hotels, restaurants and shopping centers.

Among the measures that the task force will look into are the status of skills and equipment of the city disaster risk reduction management office and the need to upgrade these.

Moreno admitted that members of the office lacked technical expertise in handling rescue operations in the river despite the 10 years that they have been involved in commercial rafting tours.

The city came under fire after relatives and friends of Balbin noted that most of the rescue and retrieval efforts were done by the Philippine Coast Guard divers and river guides belonging to commercial tour operators.

Moreno threatened to suspend all white-water rafting activities a day after the accident unless tour operators are able to show that safety measures are in place and that all pieces of rafting gear are in top condition.

“Unless they give an assurance that this will not happen again, then I will have to suspend all rafting operations,” Moreno said.

“Life is too precious compared to the economic benefits (of rafting),” he said.

Moreno, however, backed down from stopping rafting operations after meeting with Oro Association of Rafters (OAR), the local federation of rafting outfitters, which gave the mayor a list of safety protocols that have been in place over the years and a few additional measures that they plan to implement.

These include reducing rafting tours for beginners from three hours to just one hour.  OAR also committed to put in place a retraining program for river guides that includes life-saving techniques.

But not even upgraded skills and equipment would have saved the life of Balbin, according to American Mark Joffe, former director of the International Rafting Federation (IRF), the international body that sanctions rafting races and certifies river guides.

Balbin died when the raft she was in, along with three other companions and a river guide, capsized after the raft hit a boulder. Balbin drowned after strong currents pinned her under what rafters call an “undercut rock,” which is formed by strong currents constantly smashing into rocks in the riverbed.

Coast Guard divers tried to recover Balbin the morning after the accident but failed. Using 14-foot poles with hooked ends, river guides were finally able to recover Balbin’s body 48 hours after she was trapped in the undercut rock.

“When someone gets pinned in an undercut, rescue efforts can turn very quickly into retrieval,” Joffe said.

Joffe, who is in the country to scout for racing sites for the IRF, was at the river and took part in rescue and retrieval efforts.

A certified rafting instructor and longtime race organizer of the IRF, Joffe said he has seen many similar accidents in rivers in the United States and other parts of the world.

He said most rescue operations in such accidents had to be successful in five minutes or these would fail.

But he said it was impossible to remove the risks that went with white-water rafting.

What can be done, he said, is to institute a permanent retraining program to constantly improve the knowledge, skills and experience of river guides who are in the best position to keep tourists safe.

“Experience enables guides to read the conditions of the river,” he said.

“Knowledge and skills enable them to respond swiftly and effectively,” he added.

Even with constant retraining, however, Joffe said, white-water rafting will never be completely safe.

Joffe cited a June 7, 2014, accident in Clear Creek, Colorado, in which a 41-year-old man died after falling off a raft.

“I know Clear Creek. I have guided tours there many times and I know the guides there, they are solid guides,” he said.

“With the Cagayan River’s Class 2 and 3 rapids, anybody can go,” Joffe said.

But Joffe added that while the risks could be mitigated, they could never be negated.

“In the end, you still have to deal with a wilderness environment,” he said.

“Anything can happen,” he added.