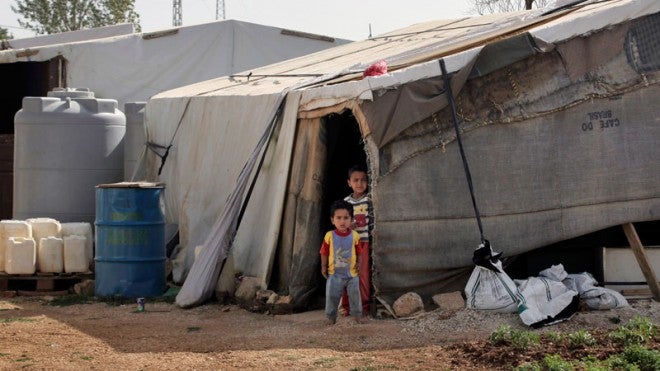 In this Thursday, June 19, 2014 photo, Syrian refugee children stand outside their tent at a Syrian refugee camp in the eastern Lebanese town of Majdal Anjar, Lebanon. For the first time since the World War II era, the number of people forced from their homes worldwide has surged past 50 million, the United Nations refugee agency said on Friday. AP

UNITED NATIONS — The humanitarian situation in Syria is worsening and the number of people needing urgent help has reached 10.8 million — almost half of Syria’s population of 22 million, U.N. Secretary-General Ban Ki-moon said Friday.

Ban’s monthly report to the U.N. Security Council said the current estimate of 3.5 million people living in areas that are difficult or impossible for humanitarian workers to reach is also likely to have increased to 4.7 million people.

The U.N. chief painted a grim picture of a country gripped by severe levels of violence, including the intensified use of barrel bombs by government forces against civilian areas and suicide attacks, reported executions and other acts of terrorism by extremist groups.

Ban said the rules that govern the conduct of war “are being flagrantly violated every day.”

“Efforts to expand humanitarian assistance to those most in need have been met with continued delays and obstruction,” he said.

Currently, all U.N. aid must go through Damascus — a practice which U.N. humanitarian chief Valerie Amos has repeatedly criticized.

New procedures sealing government trucks delivering aid which were introduced in April resulted in fewer people being reached with aid in May, he said, and additional clearance requirements introduced by the government have further undermined access to people in desperate need of assistance.

By June 9, only 12 percent of the 4.25 million people the U.N. World Food Program planned to provide with food had been reached compared to 26 percent at the same time in April, Ban said.

The secretary-general decried the government’s obstruction of the delivery of medicine and medical supplies, saying “it is inhumane and unlawful” that these potentially life-saving items continue to be removed from World Health Organization convoys entering opposition-controlled areas.

As a result, he said, opposition-controlled areas received only 25 percent of the quantities distributed in the first three months of 2014.

“Tens of thousands of civilians are being arbitrarily denied urgent and lifesaving medical care” which Ban called “a deliberate tactic of war aimed at denying help and support to those most in need.”

Ban said Physicians for Human Rights reported that 29 medical personnel were killed in May, “the highest number in a month since the start of the conflict.” He said 27 were killed by government forces and two by opposition groups, bringing the total recorded deaths of medical personnel in the war to 502.

The secretary-general said the U.N. is unable to provide an assessment of the presence and activities of foreign fighters in Syria. But he said the recent advance of al-Qaida-inspired Islamic State of Iraq and the Levant is expected to have an impact on Syria’s eastern regions “and may strengthen the presence of extremist groups in (ISIL) controlled areas of Syria.”

The Security Council approved a resolution in February demanding that all sides in the Syrian conflict allow immediate access for aid, but as Ban’s latest report indicates, the situation has worsened.

Key council members have been negotiating a new humanitarian resolution that would authorize the delivery of humanitarian aid into Syria through four border crossings without approval from President Bashar Assad’s government. But Western nations, who back Syria’s opposition, and the Syrian government’s closest ally Russia are reportedly still at odds over its provisions.