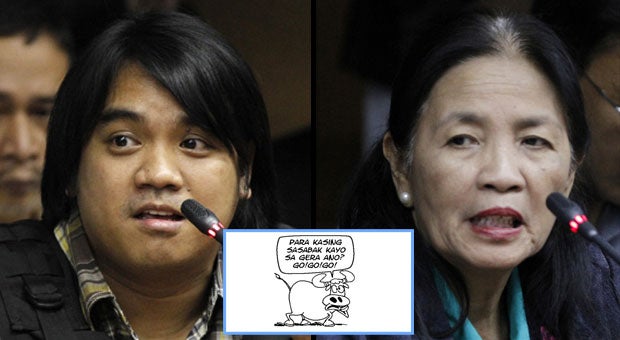 They should be “physically, mentally and psychologically prepared” when they testify against the accused in the P10-billion pork barrel scam.

That was the reminder De Lima gave Luy and Suñas in a pep talk she had with them on Thursday as the Sandiganbayan prepared for the criminal trial of Senators Juan Ponce Enrile, Jinggoy Estrada, Bong Revilla and 51 other accused.

Luy has been described as one of the main prosecution witnesses in the scam supposedly orchestrated by businesswoman Janet Lim-Napoles. Suñas has executed affidavits backing Luy’s claims.

Both witnesses used to work for Napoles and they are among the six whistle-blowers in the scam.

Under heavy guard, the two witnesses went to see De Lima at the Department of Justice.

“I told them to be ready for a long arduous fight and want them to be prepared mentally, physically and psychologically. I assured them of full support and assistance of the government,” De Lima told reporters after the meeting.

She said she motivated them on what lay ahead of them.

“It’s going to be a long fight, so therefore conserve your energy,” the justice secretary said she told Luy and Suñas. “Make sure you’re always up to it.”

De Lima said it was going to be a “strenuous” legal fight, adding the two whistle-blowers would have to attend the hearings on the plunder and graft cases to be handled by three Sandiganbayan divisions.

The whistle-blowers were the principal witnesses in all of these cases, De Lima said.

“They would be going to the court back and forth,” she added.

And with the antigraft court likely to issue arrest warrants against the 54 accused soon, De Lima said that this early she was expecting there would be a surge of applications for bail.

This would mean bail hearings that the whistle-blowers need to attend, she said.

The Ombudsman has granted the whistle-blowers immunity from suit, clearing the way for them to stand as witnesses in the alleged misdeeds of Napoles and the other accused.–With a report from Inquirer Research