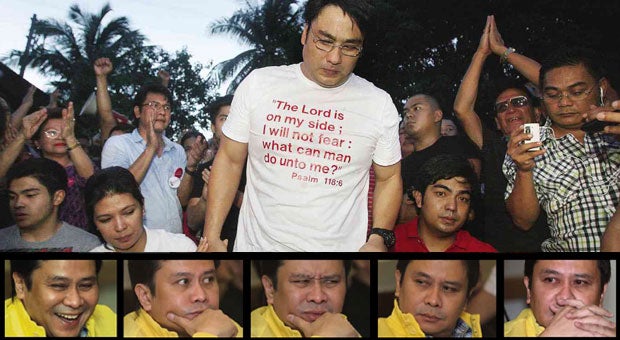 WAITING FOR THE INEVITABLE Sen. Bong Revilla, with his wife Rep. Lani Mercado, son Vice Gov. Jolo Revilla and other family members, addresses supporters in the Revilla mansion in Bacoor, Cavite province, shortly after the Sandiganbayan ordered the issuance of an arrest warrant against him on Thursday. Below are the many expressions of Sen. Jinggoy Estrada during a media forum at the Sheraton Hotel in Manila. Estrada, Revilla and Sen. Juan Ponce Enrile, who are charged with plunder and graft in connection with the P10-billion pork barrel scam, are waiting to be arrested. MARIANNE BERMUDEZ AND JOAN BONDOC

MANILA, Philippines–Emboldened by his supporters, Sen. Bong  Revilla on Thursday night told President Aquino on national TV he was ready to be jailed anywhere.

Wiping off sweat, a tired-looking and emotional Revilla, with his wife Cavite Rep. Lani Mercado and their children by his side, addressed the President and his supporters that he was ready to face the charges filed against him.

“Mr. President, I’m ready to be jailed, wherever it may be, because I believe I’m innocent,” Revilla said before a huge crowd of Caviteños at the family mansion in Bacoor, Cavite province.

“And I’m not afraid, Mr. President,” said the senator, who is charged with one count of plunder and 16 counts of graft in the Sandiganbayan along with Senators Jinggoy Estrada and Juan Ponce Enrile over the P10-billion pork barrel scam.

Revilla’s statement drew cheers and applause. “Wherever this will take me, I will fight for my rights,” he said.

The press conference was aired live on TV.

Hordes of supporters poured into the Revilla mansion as news spread that the Sandiganbayan had ruled there was probable cause to put him on trial for plunder and graft.

The antigraft court is set to issue the warrant for his arrest on Friday.

Hours after concluding its hearing on whether there was probable cause to issue the warrants, the Sandiganbayan First Division ordered Thursday that arrest warrants be issued against Revilla and 32 coaccused at 3:30 p.m.

“It appears that sufficient grounds exist for the finding of probable cause for the purpose of issuing a warrant of arrest against the accused charged in the instant cases,” the court said in a four-page resolution.

It said “the rules do not require cases to be set for hearing to determine probable cause for the issuance of a warrant of arrest.”

The court also said it was not required to personally examine the complainants and their witnesses, but only needed to review the prosecutors’ report to decide whether there was probable cause to place the accused under arrest.

It said the examination of submitted documents and evidence was left to the justices’ “sound discretion of mind.”

Thirty-three names were listed in the order, each requiring a separate warrant of arrest.

But by the time offices closed by 4:30 p.m., the warrants had not been issued.

At 4:40 p.m., Clerk of Court Estela Rosete brought the documents to the office of the First Division chair, Associate Justice Efren de la Cruz, for his signature that would make the warrants official.

But by then Sandiganbayan offices were already closed.

Moments after the Sandiganbayan found probable cause to issue a warrant for his arrest, the camp of Revilla on Thursday called the Philippine National Police regarding his plan to surrender.

One of Revilla’s lawyers “informed” the office of PNP Director General Alan Purisima that the senator would immediately go to Camp Crame if the antigraft court ordered his arrest, a senior police official told the Inquirer.

The police official, who asked not to be named for lack of authority to speak to the media, said Purisima assured Revilla’s camp that the PNP would respect his rights as an accused.

“The PNP Custodial Center is ready to accommodate the senators if the Sandiganbayan issues a commitment order for their detention at Camp Crame,” he said.

At a forum in a Manila restaurant, Estrada also said he would surrender to the PNP or any law enforcement agency to be assigned by the antigraft court.

“I committed to him. I assured him that I will surrender peacefully,” he said of Director Benjamin Magalong, chief of the Criminal Investigation and Detection Group. “There is no need for the policemen to arrest me in my residence.”

Speaking to reporters, Estrada said his arrest was “already inevitable,” and that he couldn’t do anything about it.

Enrile, for his part, kept his plan under wraps in case the antigraft court issued a warrant for his arrest.

“I won’t tell you what I plan to do,” he told reporters in a phone-patch interview.

Magalong on Wednesday said that the three senators had expressed readiness to surrender to Purisima in Camp Crame, the PNP headquarters in Quezon City.

Enrile remained confident that the court would not issue a warrant for his arrest, saying the government case against him was weak.

“But you can never tell. So just in case, I will bring the book on the History of Political Theory… the book about Mandela and a book of poems,” he said.

On Thursday night, Enrile told political leaders from his home province Cagayan that he would do everything in his power to defend himself from the “fabricated charges.”

Addressing local officials who turned up in the Senate on Thursday afternoon, Enrile said that as a son of Cagayan, he would prove his innocence in court.

“It’s as if you’ve come here for a funeral,” he chuckled, addressing them in Ilocano at the Recto Room in the Senate. “There’s no one to be interred yet. I don’t know who will triumph, but this son of Cagayan … will do everything in his power to defend his right.”

“There’s nothing I can tell you except that the charges are fabricated. We will prove this during the hearing of the case if it reaches that stage,” he added.

Enrile thanked the officials for traveling all the way from Cagayan to Manila to sympathize with him, but urged them to pray that God extend his life.

The senator said he bore no grudge against the government officials who filed the charges against him because he was confident he could prove his innocence.

“And that will start tomorrow,” he said, referring to the Sandiganbayan hearing on his motion for judicial determination of probable cause. “As a lawyer, I believe that nobody could judge you except the courts.”

He has always kept silent on the case precisely because he’s one of the accused.

“I assure you that as long as I breathe, I have strength and can still think, I will fight for the truth that I know, if only to enlighten our countrymen, especially my provincemates,” he said.

In Bacoor, Revilla again expressed readiness to face the charges in court and prove his innocence, but appealed to his critics to allow him to defend himself.

“I’m ready to face all this. I’m ready to be jailed although I’m innocent,” he said as he addressed his supporters and the media with his wife and their children.

“My only appeal is, give us a chance to defend ourselves. To the others, don’t judge us yet,” he said.

Addressing his supporters, the senator turned emotional and teary-eyed.

“Remember this, I will not betray you. Whatever I’ve achieved in public service, in show biz, I owe all of that to you. I can’t betray you. I’m not trying to put on an act,” he said.

Revilla apologized to the residents of Bulacan, Cebu, Davao and General Santos City that he said he could not visit anymore because of his impending arrest.

“Bong Revilla loves you,” he said. His supporters broke out into cheers and chanted his name.

Revilla said he wanted to see his father Ramon, a former senator,  before turning himself in.

“Actually, I haven’t seen him. Tomorrow, I will go to him before I am jailed,” Revilla told the Inquirer.

Revilla: I’m ready to die if they don’t treat me right