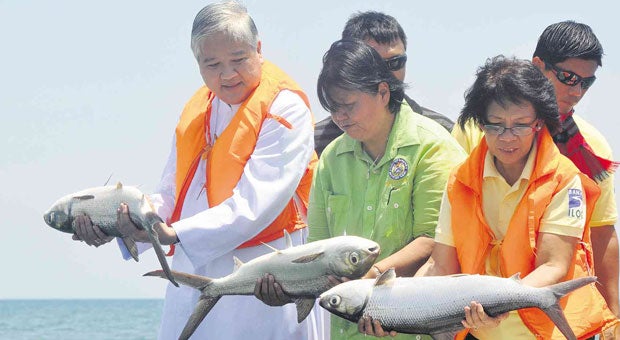 DAGUPAN CITY, Philippines—Fishery and local government officials are releasing 70 “sabalo” (mother milkfish) into the Lingayen Gulf in a bid to revive the population of “bangus” (milkfish) in the wild.

Westly Rosario, chief of the National Integrated Fisheries Technology Development Center (NIFTDC) here, said the other sabalo would be released on June 20, during the Agew na Dagupan (Dagupan Day) celebration.

Each of the sabalo weighs 5 kilograms and is less than a meter long.

Fernandez said that with the sabalo in the wild, this city, which is known for its tasty bangus, would have a steady source of fingerlings.

“A kilogram of sabalo can lay half a million eggs. So, if these are 5 kg each, it’s times five,” Rosario said.

He said the sabalo, which were raised at the NIFTDC, would have to be attended to for five years before they could lay eggs.

“Hopefully, we can improve the catch for wild bangus in Dagupan as we revive the bangus population in the wild,” Rosario said.

Fernandez said the release of the sabalo would complement her program to clean this city’s rivers.

“If you notice, in my program, we have a lot for the rivers. We have dredging, we removed fish pens and we have a ‘One Barangay, One Fish’ program. Our island tours will soon begin. I’m now working with the Department of Tourism on how to promote our rivers,” she said.

She said she would put up a local version of Bangkok’s floating market, which would be cleaner and would offer food that made Dagupan famous.

“To realize these will take time. But I can wait; I’m very patient,” she said.

Rosario has warned local fishermen against catching the sabalo.

“I want to reiterate that catching sabalo is punishable by six to eight years’ imprisonment, a fine of P80,000 plus confiscation of all fishing implements and suspension of license to fish,” he said.–Gabriel Cardinoza

‘Bangus’ saga: From Dagupan to the world