Ships move into gulf as US lays out goals for Iraq 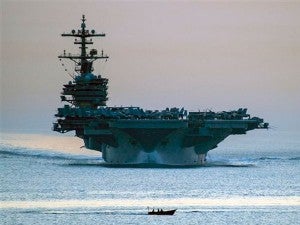 This image provided by the U.S. Navy shows a small vessel transiting in front of the aircraft carrier USS George H.W. Bush as it transits the Strait of Hormuz April 28, 2014 as seen from the guided-missile cruiser USS Philippine Sea. AP.

WASHINGTON—The United States ordered an aircraft carrier into the Persian Gulf and laid out specific ways for Iraq to show it is forging the national unity necessary to gain assistance in its fight against Islamic insurgents.

Accompanying the carrier will be the guided-missile cruiser USS Philippine Sea and the guided-missile destroyer USS Truxtun. The ships, which carry Tomahawk missiles that could reach Iraq, were expected to complete their move into the Persian Gulf by the end of the day. The Bush’s fighter jets also could easily reach Iraq.

Islamic militants of the Islamic State of Iraq and the Levant, or ISIL, have captured large swaths of territory north of Baghdad. Their advance on the capital was sending food prices dramatically higher and prompting tighter security in the city of 7 million people.

In a phone call Saturday with Iraqi Foreign Minister Hoshyar Zebari, Secretary of State John Kerry said U.S. assistance “would only be successful if Iraqi leaders were willing to put aside differences and implement a coordinated and effective approach to forge the national unity necessary to move the country forward and confront the threat of ISIL,” according to a statement by the State Department.

Kerry pointed to the importance of the Iraqi government ratifying election results without delay, adhering to its constitutionally mandated timeframe for forming a new government and respecting the rights of all citizens as it fights against terrorism, the State Department said.

Amid sectarian strife between Sunni and Shiite citizens, Prime Minister Nouri al-Maliki called for unity of all Iraqis. A Shiite, al-Maliki is widely resented by Sunnis for his perceived sectarian policies.

Kerry told Zebari that the U.S. was emphasizing with the international community as well as those in the region the threat posed by ISIL and the importance of coming to the aid of Iraq.