ANAHEIM, United States — President Barack Obama said denying climate change is like arguing that the moon is made of cheese, as he issued a call for action on global warming to Saturday’s graduates of the University of California, Irvine. 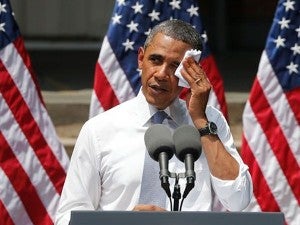 Obama told the tens of thousands gathered at Angel Stadium that Congress “is full of folks who stubbornly and automatically reject the scientific evidence” and say climate change is a hoax or fad, while others avoid the question.

“They say, ‘Hey, look, I’m not a scientist,'” Obama said. “I’ll translate that for you: what that really means is, ‘I know that man-made climate change really is happening but if I admit it, I’ll be run out of town by a radical fringe that thinks climate science is a liberal plot,'” he said.

Obama’s address to about 8,000 graduates at the Orange County campus comes two weeks after he announced a contentious plan to dramatically cut pollution from power plants. Obama also used the address to announce a $1 billion competitive fund for communities which have experienced natural disasters to rebuild and prepare for the impact of extreme weather.

He described a political system consumed by “small things” but said Americans should be determined to do “big things” like addressing climate change, despite the type of opposition he faces from Congress.

“It’s pretty rare that you’ll encounter somebody who says the problem you’re trying to solve simply doesn’t exist. When President Kennedy set us on a course to the moon, there were a number of people who made a serious case that it wouldn’t be worth it,” he continued.

“But nobody ignored the science. I don’t remember anybody saying the moon wasn’t there or that it was made of cheese,” Obama said.

The president said today’s young dreamers are fed a steady diet of cynicism but argued they have a right to be optimistic.

“Consider this: since the time most of you graduated from high school, fewer Americans are at war,” Obama said. “More have health insurance. More are graduating from college. Our businesses have added more than nine million new jobs. And the number of states where you’re free to marry who you love has more than doubled. That’s just some of the progress you’ve seen.”

While in Orange County, Obama also raised money for the Democratic National Committee at a closed-door fundraiser at the Laguna Beach home of Getty oil heiress Anne Earhart. About 25 people paid up to $32,400 to participate in a roundtable discussion with the president.

He’s spending the rest of the Father’s Day weekend on vacation at the Rancho Mirage home of White House decorator Michael Smith and his partner, US Ambassador to Spain James Costos.

We need to act on climate change—Obama

Obama to Congress: Act on climate change or I will