Where education knows no age 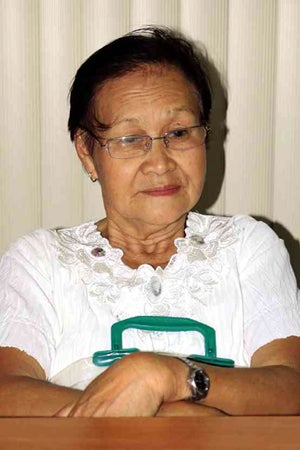 FELICIDAD Casingal, 75, says she believes age should not be a hindrance to education. CARLA P. GOMEZ/INQUIRER VISAYAS

BACOLOD CITY—When 75-year-old Felicidad Hilado Casingal showed up for her first day of class on Tuesday, her classmates thought she was their teacher.

“My classmates, who were mostly teenagers, said ‘Good morning Ma’am’ and I had to explain to them that I was not the teacher, I was their classmate,” she said.

Felicidad, a grandmother of seven and a resident of Kahirup A in Barangay Mansilingan in Bacolod, is a freshman student of Bachelor of Science in Office Administration at Bacolod City College-Taculing campus.

She received a scholarship from the city government after she topped the Department of Education’s Alternative Learning System (ALS) that made her eligible for college.

The last time she was in school was in 1954 but Felicidad decided to give her dream of getting a college degree another try now that her children were all adults.

During the first day of class on Tuesday, she could hardly contain her excitement.

Her first class was on computers, “something that she didn’t know how to use but promised herself she would learn how.

The next class was physical education where some of her classmates even kissed her hand as a sign of respect to the elders.

“I told them we must study hard in order to be successful in the future,” she said.

Felicidad didn’t go to high school after graduating from Sum-Ag Elementary School in 1954 because her house in Barangay Sum-ag, Bacolod, was 10 kilometers away from Negros Occidental High School, also in Bacolod.

At that time, she added, it was difficult to travel since there were only a few vehicles.

They didn’t also have their own vehicle because they were not well-off. Her father worked as a mason while her mother was a gambler who was not concerned about her studies.

Pursuing a degree was no longer an option after she married Bonifacio Casingal when she was 18 three years after completing her elementary education.

Since husband was a tailor, Felicidad later became a seamstress. Her life revolved around her husband, her seven children and her work.

But she lost one child to breast cancer while another drowned in a river when he was just 10 years old.

Felicidad had forgotten about her dream of a college diploma until her daughter, Junea, told her about DepEd’s ALS program.

ALS is DepEd’s free education program that provides opportunity to high school dropouts get a college degree. The students are required to attend 10 months of school or 800 hours in a classroom. Their performance is then assessed.

The most prominent product of ALS is Filipino boxing icon, Sarangani Rep. Manny Pacquiao, who was given a high school diploma after passing the accreditation and equivalency test (AET).

In the case of Felicidad, she immediately applied for ALS when she learned about it to pick up where she left off in 1954 and fulfill a dream.

She felt that it was also time since all her children are adults and can take care of themselves although they earn meager salaries. Her children and husband Bonifacio, now 88, were also supportive of her plan to go back to school.

“I want to prove to my family that I am still capable, that I am still strong despite my age,” said Felicidad, who added that when she was young she wanted to be a lawyer.

“It’s not work that I’m after. I want to gain more knowledge and to be a good example to my seven grandchildren,” she added.

Felicidad attended 10 months of classes in the ALS. She excelled in English because she got a lot of practice during Mormon learning in Church.

Last October, she took the AET and passed it with flying colors earning her a high school diploma that made her eligible for college.