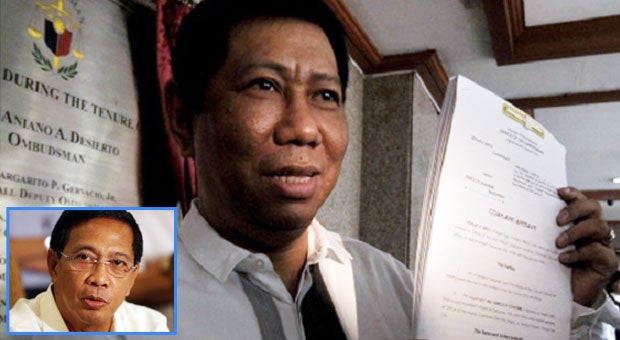 In this Jan.25 2012, photo, then Caloocan City Vice Mayor Edgar Erice files a complaint against Mayor Enrico Echiverri before the office of the Ombudsman for the unauthorized use of P1.6 billion from the Special Projects and Activities fund. Now Caloocan representative, Erice, in a privilege speech on Tuesday, June 10, 2014, said that Vice President Jejomar Binay (inset) cannot “have his cake and eat it, too” by enjoying the benefits of being allied with the Aquino administration sitting in its Cabinet, while at the same time having the privilege of lambasting the ruling Liberal Party.in Quezon City.PHOTO BY RICHARD REYES

MANILA, Philippines–Vice President Jejomar Binay cannot “have his cake and eat it, too” by enjoying the benefits of being allied with the Aquino administration sitting in its Cabinet, while at the same time having the privilege of lambasting the ruling Liberal Party (LP).

“If he is a true ally of the Aquino administration, he should order his children and party mates to stop their attacks against Malacañang and President Aquino’s party mates. But if he is a true leader of the opposition, he should immediately resign from the Cabinet so that he could continue hitting the mistakes made by the Aquino administration and the Liberal Party,” Caloocan Rep. Edgar Erice said in a privilege speech.

“It is about time for Vice President Binay to show his true colors and stop (being a two-timer). Is he an ally of the administration or the head of the opposition?” Erice asked.

Erice, an LP member, noted that Binay’s daughter, Makati City Rep. Abigail Binay, and his United Nationalist Alliance (UNA) party were part of the LP-led majority bloc in the House of Representatives.

Erice lashed out at the Vice President for his “two-faced” attacks against the LP which Binay, a former Makati City mayor, blamed for carrying out a demolition job to derail his bid for the presidency in 2016.

Erice challenged Binay to undergo a loyalty check by asking his family and allies to stop “maligning” the LP, which is being chaired by President Aquino, or quit his Cabinet post.

“The time has come for the Liberal Party to defend itself from the two-faced attacks of Vice President Binay and his UNA party mates. It is time to expose the Vice President for what he truly is—the epitome of the opportunistic ‘trapo’ (traditional politician) as best exemplified when he announced a ceasefire in the Zamboanga incident preempting and upstaging the President of the Philippines,” Erice said.

Erice was referring to attacks in Zamboanga City in September last year that was staged by a faction of the Moro National Liberation Front (MNLF) loyal to its founder, Nur Misuari.

Vice President Binay had tried to negotiate a truce between Misuari and Defense Secretary Voltaire Gazmin at the height of the 18-day fighting, but the Vice President got flak for his failed attempt.

In an interview with reporters shortly after Erice’s speech, Abigail Binay said that her father would not resign from the Cabinet just to please Erice.

She said that her father’s attacks against Malacañang were not directed against the President, who has been a longtime family friend.

Erice was irked by Binay’s allegation that LP officials were responsible for “sowing intrigue between him and the President” and charges made by his daughter-lawmaker and his UNA party mate, Navotas Rep. Tobias Tiangco, that the President’s party was responsible for the black propaganda against Binay.

Erice was referring to a “white paper” exposed by Binay’s daughter which details the alleged anomalous transactions implicating her in the pork barrel scam, specifically the use of her Priority Development Assistance Fund (PDAF) for political rallies and vermiculture projects in the Makati financial district.

According to Abigail Binay, the supposed “white paper” contends that from 2007 to 2009, her pork barrel was used to pay for political rallies and bused-in crowds, while in 2010 and 2011, there were supposed irregularities in vermiculture projects from her PDAF.

Binay described these allegations as “impossible.”

She said she was not a member of Congress in May 2007 and there were no elections from May 2007 up to 2009 involving a Binay family member that would require a pro-Binay political rally.

The white paper alleged that from 2008  to 2009, the newly elected lawmaker allotted a total of P12.6 million in PDAF to Kasanib Foundation, a nongovernment organization (NGO) founded by her father.

In 2010, she allocated P15 million to Gabay at Pag-asa ng Masa Foundation for livelihood projects of her constituents in the second district.

In the same year, she also allegedly funneled P12 million to the National Livelihood Development Corp., a government corporation embroiled in the P10-billion pork barrel scam.

The amount was for the “implementation of livelihood projects (vermiculture/composting training with backyard vegetables and herbs gardening),” the white paper said.

Erice bristled at the accusation that the LP was behind the demolition job against the Binay clan.

“I wonder why they are always accusing the LP, whenever there are ‘negative reports’ about the Binays and UNA. We have no knowledge about the ‘white paper,’ we only knew of it when it came out in the papers and was addressed by the Binay family and UNA,” Erice said.

The lawmaker noted that Abigail Binay had initially claimed the white paper was the handiwork of two brothers who held office at Bonifacio Global City.

Abigail Binay had said earlier that the brothers were “deeply entrenched in politics and mining.”

Erice noted that LP leaders themselves were victims of a demolition job as Interior Secretary Mar Roxas, Budget Secretary Florencio Abad, Agriculture Secretary Proceso Alcala and Transportation Secretary Joseph Emilio Abaya were being linked to scandals “without any document or proof.”

Erice argued that it was “not denied” that Abigail Binay exceeded her PDAF allocations by P47 million in 2007, that P12.6 million of her 2008 and 2009 PDAF allocations were channeled to an NGO founded by the Vice President.

Erice said that at least P15 million of Abigail Binay’s PDAF in 2009 went to Gabay at Pag-Asa ng Masa Foundation, “one of the bogus organizations of Godofredo Roque whose operations are similar to the NGOs of Janet Lim-Napoles.”

Erice also chided Binay for shrewdly declaring that the President was not involved in the demolition job against his family.

“The suggestion is that the President is separate from, and not a part of, the Liberal Party. They are insulting the President because both the government and the LP are being managed by the President,” Erice said.

Erice said that instead of accusing LP leaders of dragging the family in the pork barrel scam, the Binays should just explain these transactions documented in Commission on Audit reports.

Roxas is the president-on-leave of the LP.

Cayetano warns Binay will save senators indicted for pork