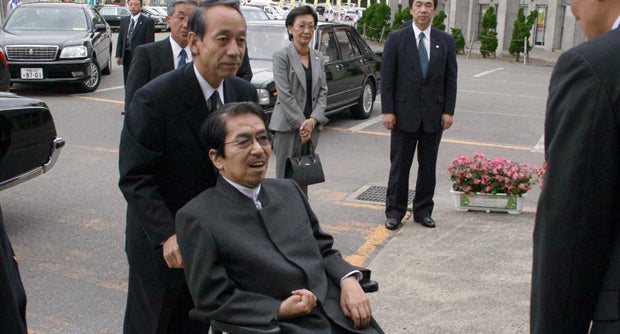 This picture taken on October 4, 2007 shows a cousin of Japanese Emperor Akihito, Prince Katsura on a wheelchair in Akita, northern Japan. Prince Katsura, 66, died of acute heart failure at the University of Tokyo hospital on June 8, 2014. AFP

TOKYO — Prince Katsura, a cousin of Japanese Emperor Akihito, died Sunday of acute heart failure after years of struggling with ill health, the palace said. He was 66.

He was pronounced dead at 10:55 am (0155 GMT) at a Tokyo hospital. The prince has fought against a string of illnesses, including blood poisoning, infections and acute subdural hematoma, a collection of blood on the surface of the brain.

He was the sixth in line to the Japanese imperial throne.

Akihito’s two sons and his grandson are the first, second, third in line to succeed the Chrysanthemum throne.