Maguindanao provincial building to be converted into school 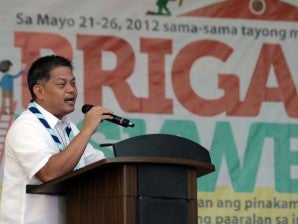 COTABATO CITY, Philippines — The mothballed multi-million-peso Maguindanao provincial capitol building and compound, now the temporary home to the military’s mechanized Army brigade, will soon be converted into a school, according to officials.

This after Education Secretary Armin Luistro gave the green light to Maguindanao Governor Esmael “Toto” Mangudadatu who came up with the idea to convert the provincial building into an educational institution for Maguindanao students.

Speaking to reporters at the sideline of the two-day international peace conference at the Notre Dame University in Cotabato City, Luistro, who visited Maguindanao on day 1 of the 2014-2015 school year, gave Mangudadatu the go signal to convert the P120 million three-story former provincial capitol into an educational institution.

The building, mothballed after the 2010 local elections that saw Mangudadatu ascending to the governorship, has a 6,000 square-meter floor area. It was built when Andal Ampatuan Sr., was Maguindanao governor in 2006.

Well-fenced in on a six-hectare lot in Shariff Aguak town that also houses a modern wood-tiled gymnasium, the compound, according to Mangudadatu, could still accommodate more school buildings.

Mangudadatu told Luistro during the peace conference that there was no better way of putting that building to good use than converting it into a public school.

Citing security concerns, Mangudadatu has refused to hold office at the provincial capitol in Shariff Aguak town, a known bailiwick of the Ampatuan family, whose clan members now stand trial for the massacre of 53 people, mostly journalists in 2009.

Agreeing to Mangudadatu’s proposal, Luistro said he would help realize that dream with the help of the education department of the Autonomous Region in Muslim Mindanao.

“If it pushes through, it will help the perennial problem of lack of school buildings in Maguindanao,” Luistro later told reporters.

After taking over as Maguindanao governor, and six months after his wife, sisters, relatives, passersby and journalists were massacred allegedly by gunmen under former Mayor Andal Ampatuan Jr. in nearby Ampatuan town, Mangudadatu moved the provincial government center to his hometown in Buluan.