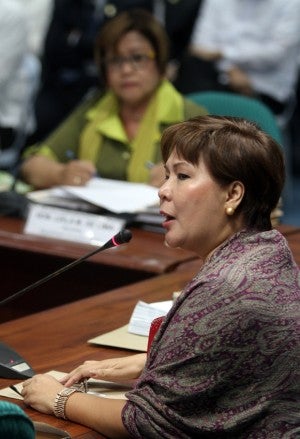 Strong opposition Sandra Cam, president of the Whistleblowers Association of the Philippines speaks while Justice Secretary Leila de Lima listens on Wednesday as she failed to get the confirmation of the powerful Commission on Appointments amid oppositions and questions raised. NINO JESUS ORBETA/INQUIRER

(This is not the straight path. This is a crooked and hypocritical government.)

(He already saw (the ‘pork’ list) and knew that his own cabinet members were involved, especially (Budget Secretary Butch) Abad and (Agriculture Secretary Proceso) Alcala, his inner circles and allies in the Congress and in the Senate. What did he do? Did he even speak up?)

She slammed Aquino for employing “selective justice,” a trait, which she said, was mirrored by Justice Secretary Leila De Lima.

Cam appeared before the Commission on Appointments on Wednesday to oppose De Lima’s confirmation. She said that De Lima did not deserve the confirmation because of her incompetence and practicing “selective justice.”

(She does not deserve to be confirmed because of her incompetence, and her being selective when it comes to justice.)

She accused De Lima of sleeping on the cases of the Reyes brothers, the suspects in the slay of broadcaster Gerry Ortega, the sex-for-flight victims, and the anomalies at the Bureau of Corrections.