“Maybe because of the perceived…closeness to the President (Benigno Aquino III),” Presidential Spokesperson Edwin Lacierda told media on Monday.

“Obviously, nobody wants to hit the President because the President’s honesty, incorruptibility, reformist image…can never be questioned. So, they are trying to hit the people around him,” he explained.

The spokesperson called on the public not to be persuaded by the “demolition attacks against honest people in government.”

Abad, a former congressman, is among the administration allies tagged in the misuse of public funds. 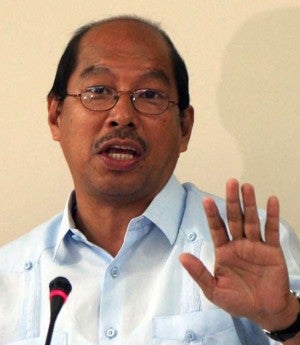 Malacañang has earlier defended the Secretary, claiming that he has made reforms in the budget process.

“What is the basis of the accusation? The accusation from Mrs. Napoles says that there was a SARO (special allotment release order) from Batanes Electrical Cooperative…the records of the Department of Budget and Management (and Batelco) showed that there was no SARO related to that,” Lacierda pointed out.

He also dismissed those complaining that there are too many members of the Abad family in government.

According to Abad’s latest statement of assets, liabilities and net worth, he has nine relatives in various government agencies, including his wife Congresswoman Henedina Abad and his daughter Julia Andrea Abad who is also a Secretary and head of the Presidential Management Staff.

He has two cousins in local courts in Batanes, a niece who has a rank of Director IV in the Office of the Appointments Secretary and four nephews who are employees of the House of Representatives, Veterans Memorial Medical Center, Philippine National Oil Company and National Commission on Indigenous Peoples.

Lacierda said the Abad surname “should not be a basis for saying they have too much power.”

“I think their performance in government should be a gauge as to whether they are an asset to the country and to the government,” he said.

He said Abad remains a long-time friend of the President and that they share common ideals.

“Some people will try to bring us down but we will not be deterred by our decision, by our commitment, by our contract with the people to serve the public hood,” Lacierda said.