Get out and register, Padaca urges PWD voters | Inquirer News 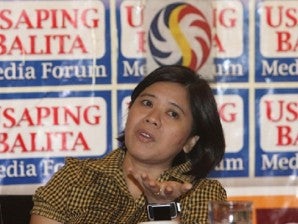 MANILA, Philippines–The Commission on Elections (Comelec) has called on the 79,375 persons with disabilities, or PWD voters who are registered nationwide, to come to the agency’s centers to fill out supplementary forms indicating their type of disability and what kind of assistance they would need during the May 2016 presidential polls.

An undisclosed number of PWD registered voters—including Comelec Commissioner Grace Padaca—are not yet listed or recognized in Comelec files as PWDs and therefore would be unable to avail themselves of the special privileges granted to PWDs.

This was “because most of us became voters before the issuance of the new Comelec resolution providing for supplementary registration forms identifying PWDs,” Padaca explained.

“People like me need to update our Comelec records if we want to be identified as PWD voters and avail ourselves of the option of voting at more accessible polling places in May 2016,” she told the Inquirer.

Padaca noted that “for the first time, PWDs, together with senior citizens, will be given a choice of which polling places are more accessible to them.”

“They will have the option to have their names transferred to a more accessible election precinct where they can be more comfortable,” she said.

Citing the poll body’s records, Padaca said Central Visayas “has the most number of PWD registered voters with 12,659, followed by southern Tagalog with 9,119.”

During the registration period, scheduled from May 6 this year to Oct. 31, 2015, “they will be asked to signify on their registration forms that they have a particular disability and what type of assistance they would need during the actual elections in 2016, as well as indicate if they choose to vote in more accessible polling places instead of their regular election precincts.”

They will also need to update their forms to include biometrics data, which consist of digital fingerprints, photo and signature, which aims to clean up further the agency’s voter’s list.

“All these are in accordance with the new law, Republic Act No. 10367, otherwise known as the Act providing for Mandatory Biometrics Voters Registration,” she said.

In the 2016 elections, “the rule would be no biometrics, no chance to vote,” she stressed.

Padaca asserted that “it is every Filipino’s moral duty to vote for the right leaders of the country.”

“Elections give the people the opportunity to choose who will govern them,” she said.

However, “in order for them to vote, they must first register,” said the former Isabela governor.

Of the 52.4 million registered voters nationwide, more than 7.3 million have no biometrics, according to Comelec records.

The poll body expects an increase of about three million new voters, or a projected total of over 55 million voters in 2016.