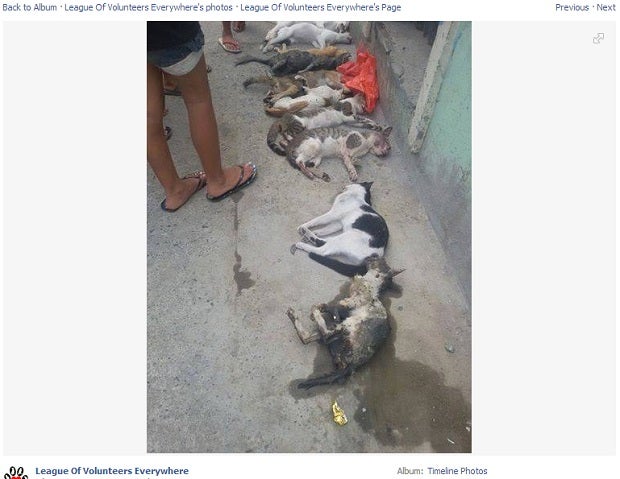 MANILA, Philippines—A man who was abandoned by his wife went on a killing spree and slaughtered 11 cats in Rizal province.

Marvin Reyes, 29, was jailed in Antipolo City after admitting he slaughtered the animals, according to a television report.

A photo posted on Facebook by the animal rights group League of Volunteers Everywhere shows the dead felines dumped on an alley.

Reyes allegedly went berserk and butchered the cats because his wife abandoned him.

“He was apparently deserted by his wife which made him murder the cats out of a whim,” the Facebook post dated May 21 read.

The suspect faces charges of violating the Animal Welfare Act as well as malicious mischief and trespassing, a  radio report said.

The report also quoted the suspect’s sibling as saying Reyes has a mental illness and addicted to drugs.

300,000 dogs killed for meat in Philippines every year