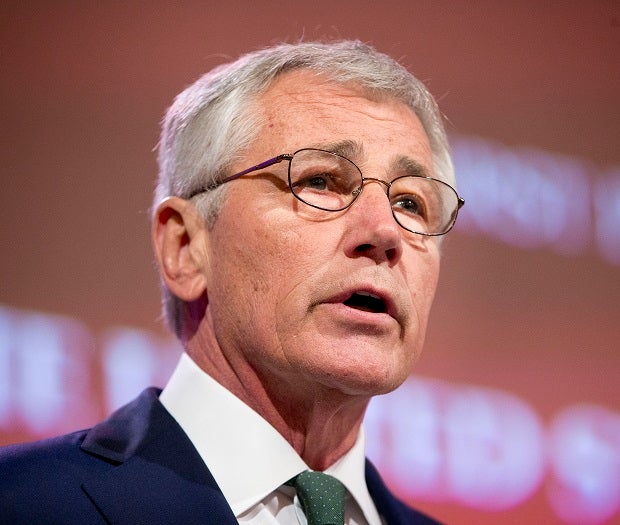 U.S. Defense Secretary Chuck Hagel speaks at opening plenary meeting at the 13th Asia Security Summit in Singapore, Saturday, May 31, 2014. Defense Secretary Hagel warned an international security conference Saturday that the U.S. “will not look the other way” when nations such as China try to restrict navigation or ignore international rules and standards. AP

ABOARD A U.S. MILITARY AIRCRAFT— Days after the U.S. and China traded new accusations of cyberspying, Defense Secretary Chuck Hagel said Thursday he will press the same issues in a face-to-face meeting with a top military officer from Beijing this weekend.

Hagel said he also plans to raise many of the territorial disputes that have raised tempers in the Asia Pacific region and talk about “where we think China is overplaying its hand and presenting new challenges and new tensions to this area.”

His meeting with Lt. Gen. Wang Guanzhong, deputy chief of the General Staff, is slated for Saturday. It comes during a national security conference in Singapore, where other Asian nations are also likely to air complaints about the escalating clashes in the region over disputed islands, colliding ships and China’s placement of an oil rig in waters claimed by Vietnam.

Speaking to reporters traveling with him to the Shangri-La Dialogue, Hagel said the only way to deal with the differences “is to be upfront” about them. He also said that despite the disputes, the U.S. and China continue to try to improve their military relations to assure the region that the two powerful nations “have some sense of each other’s intentions, we have some ability to communicate when tensions rise, we have mechanisms, bridges, to deal with those before they get beyond our ability to deal with them.”

One topic of discussion will probably be the U.S. move less than two weeks ago to charge five Chinese military officers with hacking into American companies to steal trade secrets. The Chinese fired back this week, saying a monthslong investigation concluded that the U.S. is conducting unscrupulous cyber espionage and that China is a major target.

The usually cool relationship between Washington and Beijing has been particularly frosty lately, as they have sparred over the cyberattacks, China’s military buildup and its aggressive territorial claims in the East and South China Seas.

In China for meetings with senior leaders last month, Hagel at one point wagged his finger saying that Beijing has no right to establish unilaterally an air defense zone over disputed island in the region with no consultation with other nations.

This week, U.S. officials expressed concern about dangerous conduct and intimidation by Chinese ships when a wooden Vietnamese fishing boat sank after a clash with a Chinese vessel in the South China Sea.

Beijing’s recent declaration of an air defense zone over a large swath of the East China Sea, including disputed islands controlled by Japan, has raised complaints from the U.S., deepening concerns that it could spark a confrontation.

Washington has refused to recognize the zone or follow China’s demands that its aircraft file flight plans with Beijing’s Defense Ministry and heed Chinese instructions. China has warned of unspecified retaliatory measures against aircraft that do not comply, but so far it has taken no action.

This is Hagel’s fifth trip to Asia in a little more than a year and it’s aimed at furthering U.S. efforts to focus more on the Pacific region.

The Pentagon has added more troops and rotational deployments to the region, increased the ships assigned to the Pacific and laid out plans to beef up missile defense systems aimed largely at protecting the area and the U.S. from any provocative actions by the North Koreans.

China calls on US to stop ‘unscrupulous’ spying