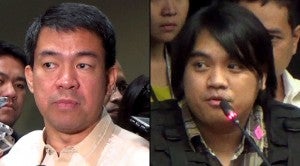 Unlike other members of the Senate blue ribbon committee, Pimentel saw no need to summon Luy to a public hearing to explain his digital files that detail transactions between alleged pork barrel scam mastermind Janet Lim-Napoles and lawmakers and government officials.

“Why even try to make sense out of useless nonsense? Time is better spent on real hard evidence, which should already be out there, not inside a hard disk drive,” Pimentel said in a text message.

“[O]nly he can authenticate and explain the entries in his hard drive. He can and should do this in a [press conference] and in a Senate hearing,” Recto said.

“He already has an affidavit. Does he plan to add more to his affidavit? That should be asked of him,” he added.

He said the files, which had been made public by the Inquirer in a series of reports and the blue ribbon committee, which received a copy of the files from the National Bureau of Investigation on Wednesday, had no value as evidence in court except against the creator of the files himself.

Pimentel suggested that the Department of Justice follow the paper trail by gathering documents such as special allotment release orders (Saro), notices of cash allocation (NCA), checks and approvals.

“Let’s concentrate on evidence that can be used in the courts of law, not the court of public opinion,” he said.

Luy’s files included entries whose contents had been deleted but retrieved.

The entries had such familiar code names such as “Bigote,” “Dahon,” “Tanda,” “Sexy,” “Pogi,” “Bonget” and “Bigboy,” as well as the surnames of senators and members of the House of Representatives.

If at all, Pimentel said the blue ribbon committee should summon Napoles, her husband and children to shed light on her expanded affidavit in which she implicated 20 senators and 100 House members in the scam.

“If the blue ribbon committee has time to call witnesses, let it be Napoles herself, her husband and adult children. No need to testify on any computer files,” he said.

Following the disclosure of Luy’s files and Napoles’ expanded affidavit, several senators have asked the blue ribbon committee to reopen its inquiry into the scam and summon Luy and Napoles again.

Committee Chair Sen. Teofisto Guingona III said the members of the panel would analyze Napoles’ affidavit and Luy’s files before deciding when to call a public hearing.

Read Next
Sin tax found effective vs smoking–SWS
EDITORS' PICK
Alex Eala wins Grand Slam on Independence Day: ‘I hope I made my contribution to the country’
Ahead of ONE: Full Blast II, Mongkolpetch warns Elias Mahmoudi: ‘Watch out for my fists’
Rare earth metals at the heart of China’s rivalry with US, Europe
PNP, PDEA destroy P25.8M worth of marijuana in Kalinga
G7 rivals China with grand infrastructure plan
Kai Sotto continues to inspire Filipinos by sharing his passions and stories with Smart Prepaid
MOST READ
Chel Diokno, Bro. Eddie, Ate Vi decline 1Sambayan 2022 poll nomination
1Sambayan names 6 choices to pit vs Duterte’s anointed in 2022
Groups slam Duterte ‘surrender’ to China
G7 rivals China with grand infrastructure plan
Don't miss out on the latest news and information.