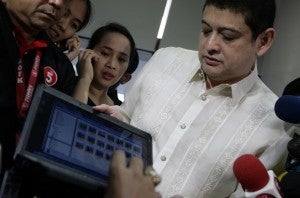 MANILA—Malacañang is not bothered by the inclusion of Executive Secretary Paquito Ochoa Jr.’ name in Benhur Luy’s files on the pork scam.

Communications Secretary Herminio Coloma Jr. said Friday that unsigned draft letters addressed to lawmakers and Ochoa uncovered in Luy’s files “could hardly be considered as having any probative value.’’

Several documents in the Word files include draft letters addressed to Cabinet officials, including then Agriculture Secretary Arthur Yap and Ochoa. Ochoa was also mentioned in the deleted entries in the files.

The Senate Blue Ribbon Committee last Thursday released CDs of Luy’s files to the media after getting a copy from the National Bureau of Investigation.

“In my understanding of the adversarial justice system, there is a chance to compare, study the conflicting positions, and that is the job of the prosecutors when they are still in the stage of examining evidence,’’ he said. “And should an information be filed, that could also be performed by the Office of the Ombudsman.’’

In her affidavit, Napoles claimed it was Abad who mentored her on how to convert lawmakers’ pork barrel funds into kickbacks. Abad has flatly denied this.

Among the deleted items in Luy’s files was a letter-request addressed to Abad.

“As the President said, the people should be vigilant and observant, and not allow themselves to be deceived,’’ Coloma said in response to questions if Luy’s files appeared to have been “manipulated.’’

“That’s why concrete evidence should be the basis for our analysis of the value of the different lists, and the scenario that is being drawn,’’ he added.

Coloma called the public’s attention to the Ombudsman’s impending final resolution of the complaints of plunder and graft filed against three senators, Napoles and several other persons.

He noted that the 60-day period within which the Ombudsman has to rule on motions filed by the respondents for it to reconsider an earlier decision to bring the charges to trial by the Sandiganbayan anti-graft court expires on June 1.

The Ombudsman on April 1 resolved that there was sufficient evidence to indict Senators Jinggoy Estrada, Juan Ponce Enrile and Ramon Revilla Jr., Napoles and others on charges of plunder and graft in connection with the scam.

“`We should expect an announcement from the Office of the Ombudsman on their action on the motions for reconsideration,’’ he said. “In the event they throw out the motions, the next logical step will be the filing of information with the Sandiganbayan.’’

Coloma also said groups planning to mount anti-corruption rallies on or before Independence Day were free to do so.

“We respect the right of our citizens to assemble and express their concerns on particular issues, which we hope will be done peacefully and in an orderly manner,’’ he said.

Whistleblowers who participated in ‘pork’ scam should be jailed—Recto