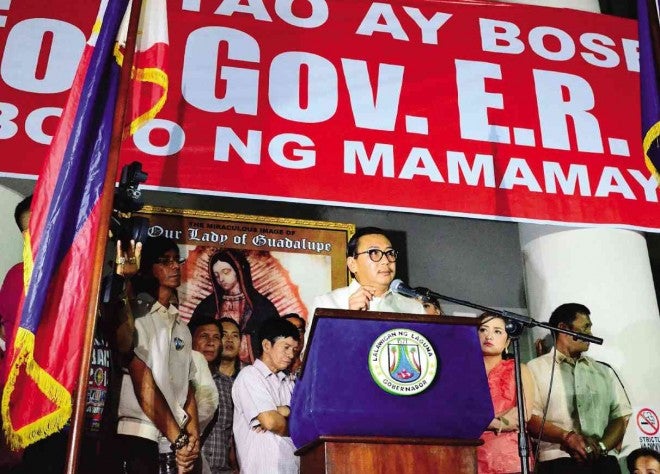 MANILA, Philippines—Disqualified Laguna governor Emilio Ramon “ER” Ejercito left the provincial capitol on Friday morning but assured his supporters that their fight will not stop there.

Reiterating his stand during an earlier speech at the Laguna Capitol, Ejercito said that he would be the province’s governor “now and forever” and said “hintayin po ninyo ang pagbabalik ng agila!”

The crowd went emotional as Ejercito left with his uncle, former President and now Manila Mayor Joseph Estrada, who came in Laguna Capitol in Sta. Cruz town to support him as he continued to contest his disqualification for overspending in the 2013 elections.

(My compatriots, for the peace and order in our province, our beloved (former) president (Estrada) has requested me to temporarily leave my post to avoid chaos and so that no one will be hurt.)

Ejercito also asked his supporters to wait for the final decision of the Supreme Court on June 17 when it releases its decision on the status quo ante order his camp filed.

Before facing the crowd and leaving the capitol grounds, Ejercito and Estrada talked for about 20 minutes in a closed-door meeting.

(Governor, come with me. Let’s step down. I am sure the people will support you.)

Estrada, who was previously ousted as President, consoled Ejercito, saying they will make a comeback.

(I ran for Manila mayor. I was able to make a comeback. We will fight.)

Before he was elected as Manila mayor, Estrada was found guilty of committing plunder and was put behind bars for seven years.

The Commission on Elections (Comelec) on May 21 affirmed Ejercito’s disqualification for overspending during the May 2013 elections. He tried to appeal his case before the Supreme Court (SC), but the high court did not grant his request for a temporary restraining order on the deadline set by the Comelec.

This paved the way for erstwhile vice governor Ramil Hernandez to assume Laguna’s top local post on Tuesday, May 27.

Since Tuesday, Ejercito and his supporters have stayed at the capitol. On Wednesday, the Department of Interior and Local Government has served him his eviction order.

Ejercito maintained that his decision to leave is temporary. He said he will wait for the decision of the SC to settle the controversy.

Carlos Dolendo, in a phone interview, Ejercito’s chief of staff, said that his departure from the office did not mean that he was giving up the fight for the governor’s seat.

Dolendo said they were surprised by Ejercito’s decision to physically vacate the governor’s office because Estrada was just there supposedly to visit his nephew but later “convinced” the governor to leave instead.

Comelec ruling not yet final—Ejercito

Read Next
PNP to deploy 20,000 policemen for school opening
EDITORS' PICK
97 areas in PH under Alert Level 4 — DOH
Declaration of Pacquiao as PDP-Laban presidential bet illegal — Cusi wing
COVID-19 cases may peak by October — DOH
Watch live performances by ITZY, Mamamoo and other K-pop stars on Smart’s GigaPlay App
Welcome the next imagery master with vivo X70 co-engineered with Zeiss
An innovative, fun shopping experience AllDay
MOST READ
Roque not surprised by opposition to ILC nomination: They do not wish anyone to succeed
Son of prominent businessman nabbed in La Union for cocaine possession
Declaration of Pacquiao as PDP-Laban presidential bet illegal — Cusi wing
Drilon wants income tax records of Pharmally execs with luxury cars
Don't miss out on the latest news and information.