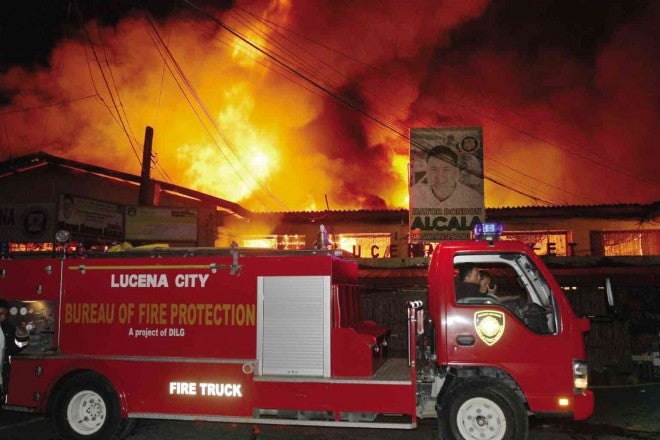 FIRE rages in a building that houses the dry goods section of the Lucena City public market. TSIBOY MALLARI/CONTRIBUTOR

LUCENA CITY, Philippines—More than 300 stalls at the dry goods building of the city public market here were destroyed in a four-hour fire of still unknown origin on Wednesday, casting a pall of gloom over the celebration of the feast of the city’s patron saint, St. Ferdinand, today.

Lucena Mayor Roderick Alcala said he would call the fire victims to a meeting to find out how the city government could help them.

“This is a sad fiesta for the fire victims and their workers,” said the mayor.

He said the city government would quickly build a new market in the same site. While no new market is in place, vendors would be relocated to allow them to continue doing business, he said.

Vendors were asked to transfer temporarily to two satellite markets built by the city government in the villages of Gulang-Gulang and Ibabang Dupay.

The new markets failed to attract vendors and buyers because they are outside the city proper.

Yesterday, many vendors were seen sifting through the fire debris for valuables that they can still recover.

The market building, which sits on a 4,000-square-meter land, was built to replace a market that was destroyed in a fire that almost wiped out the entire city in 1965.

Spared from the Wednesday fire is a two-story wet market building separated by a narrow road from the burned market.

Senior Insp. Joel Reyes, Lucena fire chief, said investigators have yet to determine the cause of the fire that started around 8:30 p.m. Wednesday and was put out 12:45 a.m. of Thursday.

Some vendors told Inquirer that they heard a series of explosions shortly before the fire.

Reyes said exploding gas stoves and stocks of calcium carbide in some stalls caused the fire to spread.

Some fire trucks from towns that sent help were delayed in arriving at the fire scene as major streets in the city were blocked because of a street parade for the feast of St. Ferdinand, which is to end Friday.