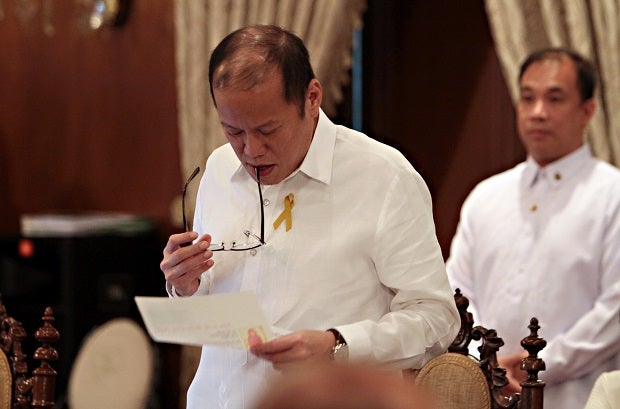 President Benigno S. Aquino III reads from a document before the start of the NEDA board cabinet meeting at the Aguinaldo state dining room in Malacanang on Thursday. GRIG C. MONTEGRANDE/INQUIRER

MANILA, Philippines – Former Iloilo Representative Augusto Syjuco Jr. filed a libel case against President Benigno Aquino III for his tirades against Syjuco during his 2013 State of the Nation Address (Sona).

In a nine-page complaint affidavit filed before the Office of the Ombusman on Thursday, Syjuco said Aquino “acted with ill will and bad faith” when he accused Syjuco of allegedly overpricing the purchase of training materials for the Technical Education and Skills Development Authority (Tesda).

Syjuco headed the agency under Arroyo.

Syjuco quoted Aquino as having said:

“Let’s be clear: This is a dough cutter, not a Hamilton Class Cutter. Perhaps when he finally has his day in court to face the cases filed by the Ombudsman, Mr. Syjuco will finally learn to count,” Aquino added.

“The above statements not only tended to vilify my reputation or character but actually vilified it. The statements held me out publicly as a thief,” Syjuco said in his complaint.

Syjuco said the President failed to note that he initiated the investigation into the alleged overpricing.

Syjuco also criticized Aquino for singling him out when the alleged overpriced projects were approved by a board and not him.

The former Tesda chief added that all elements of libel were present in Aquino’s speech.

“The President’s personal attack against me reeks with malice. He specifically singled me out and labeled me a thief in a nationally broadcast speech,” Syjuco said in his complaint.

“Coming from the President of the Philippines and delivered in an event which is a major constitutional moment, the accusation – which is a lie – smeared my family’s good name in a way which no other person could. It was a serious imputation made in the most national way possible with the widest audience reach,” he added.

Syjuco is facing six graft charges before the Sandiganbayan in connection with the alleged P61-million overpricing in the purchase of Tesda training materials. The Sandiganbayan has issued a hold-departure-order against him.

Syjuco has also filed charges against known Aquino allies. He filed a plunder complaint against Senate President Franklin Drilon over the questionable release of millions in Priority Development Assistance Funds (PDAF) or pork barrel for a project in Iloilo, Drilon’s home province.

He also filed plunder and graft charges against Budget Secretary Florencio Abad and Drilon for the questionable release of PDAF to Abad’s wife 10 times her regular pork barrel allocation for the lone district of Batanes.

Syjuco also accused Abad of allowing the alleged release of P1 billion in incentives to senators who voted to convict then Chief Justice Renato Corona.

Ex-Rep. Syjuco to Aquino: Why pick on me?