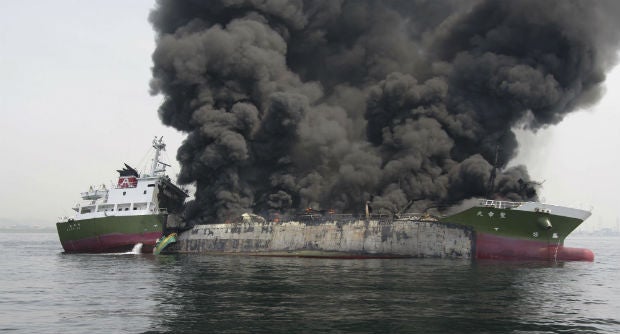 In this photo released by Japan’s 5th Regional Coast Guard, clouds of black smoke billow from Shoko Maru, a 998-ton Japanese oil tanker, after it exploded off the southwest coast near Himeji port, western Japan, Thursday, May 29, 2014. One of the eight people aboard is missing and the other seven were injured, according to the coast guard. AP/Japan’s 5th Regional Coast Guard

TOKYO – Japan’s coastguard was rushing Thursday to deal with an explosion and subsequent fire aboard a tanker off the country’s coast, officials and the prime minister said.

“We had information that there was an explosion on the tanker Shoko-maru,” a spokesman at the local coast guard office said, adding it was near Himeji Port in the west.

Coastguards have arrived at the location, which is around 450 kilometers (280 miles) west of Tokyo, but were “yet to confirm the safety of the eight crew members on board,” he said.

Speaking in parliament, Prime Minister Shinzo Abe interrupted a debate to announce: “In waters off Hyogo (prefecture), a tanker has exploded and is currently in flames.”

The Kobe Shimbun, a local newspaper, said the vessel was around two kilometers south of the port, which sits in a busy shipping area.

The paper added that the 998-ton ship was not believed to have been fully laden.

Black smoke was seen billowing from the ship, up to a height of 100 meters (300 feet) the paper said, citing a coastguard official.

6 hurt by explosion and fire on cargo ship in Bacolod