What Went Before: Saga of the ‘Hello Garci’ tapes 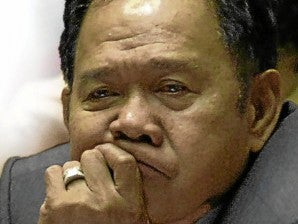 The Ombudsman, in a March 18 resolution, found probable cause to charge Garcillano with perjury. The case stemmed from a complaint filed in January 2012 by then party-list Representatives Neri Colmenares and Teddy Casiño (Bayan Muna).

The “Hello Garci” controversy arose after audio recordings of a telephone conversation surfaced in 2005.

The conversation, presumed to have been between Garcillano and Arroyo, is thought to have occurred at the time the results of the 2004 elections were still being tallied.

On June 6, 2005, in an attempt to preempt the opposition, then Press Secretary Ignacio Bunye played to reporters two CDs of purported tapped conversations between Arroyo and Garcillano.

In the so-called “Hello Garci” conversations that Bunye claimed were “doctored,” the voice of a woman could be heard asking the person on the other end of the line to protect her purported lead of one million votes over her closest rival.

The next day, opposition lawyer Alan Paguia released his own two tapes of the conversations. He later said he got the tapes from former Sen. Francisco Tatad, who said they were mailed to him.

On June 10, 2005, former National Bureau of Investigation Deputy Director Samuel Ong claimed that he had “the mother of all tapes” that would implicate Arroyo. He said he got the material from Sgt. Vidal Doble, a friend at the Intelligence Service of the Armed Forces of the Philippines (Isafp).

The Isafp later denied it was engaged in wiretapping. Doble also denied that Ong’s tapes had come from him. But he said that he appeared in a scripted videotaped “authentication” of the wiretaps after he and his family were threatened, and later received P2 million for the effort. He said the money came from Laarni Enriquez, a mistress of former President Joseph Estrada. Enriquez later denied this. Ong died of lung cancer in May 2009.

On June 21, 2005, the House of Representatives opened inquiries into the wiretapping and played the tapes.

Six days later, in the face of mounting calls for her resignation, Arroyo admitted in a televised address that she had called an election officer because she was anxious to protect her votes.

“I am sorry,” she said. But she did not name the person on the other end of the line.

Garcillano ignored summons to appear before a congressional hearing.

He denied that he had left the country and said he was in the homes of Muslim friends in Mindanao, reading and writing his memoirs. He admitted having talked with Arroyo several times in 2004 but claimed there was no mention of protecting votes. He declined to authenticate the tapes.

In January 2006, the House inquiry was concluded without a resolution of the issue—a failure blamed on Arroyo’s order in September 2005 barring officials from testifying in congressional hearings without her permission.—Inquirer Research