2 bishops call for speedy rehabilitation of Eastern Visayas from Yolanda 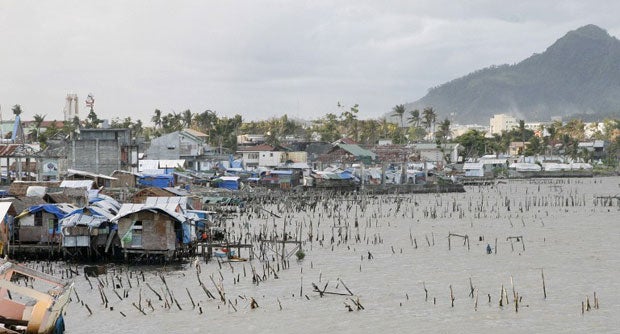 The coastline of Tacloban City on May 7, 2014, still bears scars from the massive damage left by Super Typhoon Yolanda that devastated the central Philippine city six months ago. AFP FILE PHOTO

Bishops Isabelo Abarquez of Calbayog Diocese and Crispin Varquez of Borongan Diocese said the rehabilitation effort of the government has been “a little bit slow.”

“Maybe there are reasons. I don’t know. I appeal (to our national government) to hasten the release of money intended for the Yolanda victims so that we can avoid more delays in the delivery of goods, especially for rehabilitation,” Abarquez said.

Abarquez said he was surprised to learn that local government units hit by the supertyphoon had yet to receive financial assistance from the national government.

“I asked the locals—the mayors and the governor—if they already received financial assistance from our government, they said they haven’t,”

Abarquez’s area covers Samar, including the towns of Basey and Marabut, which are still reeling from the devastation caused by Yolanda.

The jurisdiction of Varquez includes the entire Eastern Samar where 10 of its 22 towns and one city were affected by the supertyphoon.

Both prelates said their respective dioceses had given fishing boats and temporary shelters to Yolanda victims.

Varquez said 120 temporary shelters, made of corrugated sheets and plywood measuring 12 x 18 feet, have been constructed by the Borongan diocese for families who lost their homes to Yolanda.

He added that 130 fishing boats have also been distributed to fishermen within the diocese.

Varquez said the diocese could not help all the victims of Yolanda since they were also dependent on donations from private groups or institutions.

“The government should respond to the needs of the people. We don’t have money. The Borongan diocese is not landed,” Varquez said.

Asis Perez, national director of the Bureau of Fisheries and Aquatic Resources (BFAR) and the regional coordinator for agriculture sector on Yolanda rehabilitation, said that the government has been doing its share in helping the victims.

Perez said it wouldn’t be appropriate if the government would announce what it was doing for the victims since “it’s part of our job; it’s service unlike the private sector.”

Perez said that the government could not just release money like the private sector because they have been “bound to so many rules and processes.”

Otherwise, he added, any shortcuts would be called out by the Commission on Audit.