MANILA, Philippines – Ten  years after the “Hello Garci”  controversy,  Senator  Grace Poe lamented that  almost none of those allegedly involved in the 2004 poll fraud had neither been charged nor spent a single  night  in  jail.

Taking the floor on Wednesday, Poe revived the 2004 poll fraud scandal, which she described as a “dark time in our nation’s history.”

“It’s often said that Filipinos are too forgiving – that we have short term memories.  Iilan lang ba sa atin ang naaalala pa ang ‘Hello Garci’?” she said in her speech.

The “Hello Garci” she was referring to was the alleged phone conversation between former President  and now Pampanga Representative  Gloria Macapagal-Arroyo and  then  Commission on Elections commissioner  Virgilio Garcillano during the 2004 elections. The call was allegedly about a plot to rig the results of the election in some areas in Mindanao.

“But I believe that there are still many Filipinos that remember, as I do.  And I know that I won in the 2013 elections precisely because people remember FPJ and the great injustice Mrs. Arroyo  committed against the voters. “Hello Garci”, for better or worse, changed the course of history in the Philippines,” she said. 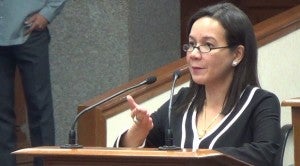 FPJ is the initials of Poe’s father, the late Fernando Poe Jr., who lost to  Arroyo in 2004.

“May kasabihan sa Pilipinas na walang pulitikong natatalo, nadadaya lang. But the case of Fernando Poe Jr. was very different because (for the very first time) there was real, clear, hard evidence to prove that massive cheating did take place in the 2004 presidential elections,” said the senator.

“Aside from the notorious “Hello Garci”wiretaps – which captured (no less than) Gloria Arroyo talking to then Comelec commissioner Garcillano – there is a host of other evidentiary proof to show that the Arroyo camp cheated their way to victory,” she said.

The senator then played a PowerPoint presentation  to “illustrate  how Garci and his minions succeeded in subverting the will of the people.”

But 10 years after, Senator  Poe lamented that “almost all those who were involved in the Hello Garci tapes have not been charged to date, much less spent a single night in jail” except Lintang Bedol.

“In our country many wrong-doers do not get punished while good people are made to suffer when they come out and speak the truth,” she said.

“Worse, some of those involved are still in government today,” she said.

The senator specifically wondered what happened to the following individuals who figured in the “Hello Garci” scandal:

“On the other hand, whatever happened to these courageous individuals who risked life, family, comfort and career to speak the truth,” she said.

The senator then specifically cited the names of retired General Francisco Gudani, who she said was “unceremoniously replaced” as head of Task Force Lanao; Vidal Doble, an intelligence agent  who leaked the Garci tapes;  Michaelangelo Zuce,  Garcillao’s nephew, who testified about the pay-offs he made; Abdullah Daligdig, who exposed  the COC discrepancies in the Autonomous Region in Muslim Mindanao; and Sammy Ong, (NBI deputy director who exposed the “Garci Tapes”  to the media and charged with sedition by the Arroyo administration.  Ong died in May 2009.

And to prevent the repeat of the 2004 poll fraud in the future, the lady senator proposed several reform measures like Senate Resolution No. 679, calling for  the Omnibus review of the Electoral Code of the Philippines.

She also  proposed to amend the the Anti-Wiretapping Law to include not only terrorism, espionage and other crimes involving national security, but also election fraud as one of the crimes in which a court could legally authorize a wiretap.

“Moreover, I will also be proposing that the prescriptive period for election offenses be increased, from the current five (5) years to ten (10) years,” said the senator.

“As we have seen, almost none of the “Garci Boys” (or those mentioned in the “Hello Garci” tapes) have spent a day in jail simply because they enjoyed protection from the powers-that-be.”

Since the President is also immune from suit for the duration of his/her six-year term, the senator said, no charges had been filed against Mrs. Arroyo for her complicity in the 2004 election fraud until her term ended in 2010.

“Mrs. Arroyo became president through fraudulent means. What she had was merely a mandate “manufactured” for her by her election operators. This ultimately proved to be her weakness, her Achilles Heel,” she said.

“Since Mrs. Arroyo had no real mandate and no moral ascendancy, she became utterly dependent on those unscrupulous individuals who helped manufacture her mandate. And this dependence has only resulted in a seemingly never-ending series of corruption scandals during her nine years in office,” she further said.